What does the HDI measure?

The HDI is a simple summary index for assessing long-term progress in three basic areas of human development: leading a long and healthy life; access to knowledge; and enjoying a decent standard of living. A long and healthy life is measured by life expectancy at birth; knowledge level is measured by average years of schooling and expected years of schooling, while standard of living is measured by Gross National Income (GNI) per capita1. The scores for these three HDI dimension indices are then combined into a composite index.

The HDI is widely used as it helps provide a holistic ranking of a country’s progress on human development. The latest 2015 Human Development Report (HDR) presented the 2014 HDI (values and ranks) for 188 countries and the United Nations-recognised

1 The GNI per capita is gross national income divided by mid-year population. GNI is the sum of a nation’s gross domestic product plus net income received from abroad. It measures income received by a country both domestically and from overseas.

territories. Countries were grouped according to four categories of human development achievements:

Over the years, Fiji has made consistent progress in each of its HDI indicators (Table 1). Between 1980 and 2014, Fiji’s HDI ranking increased from 0.578 to 0.727, an increase of 25.8 percent or an average annual increase of about 0.68 percent. During the same period, Fiji’s life expectancy at birth increased by 7.0 years following the Fiji Government’s emphasis on improving the services and facilities of the health sector, in particular, maternal and child health care. Similarly, the average years of schooling increased by 4.0 years and expected years of schooling increased by 4.9 years, as the Government has prioritised investment in the education sector over the years. In the same period, the country’s GNI per capita increased by about 52.4 percent consistent with economic growth, and higher employment opportunities and remittances. 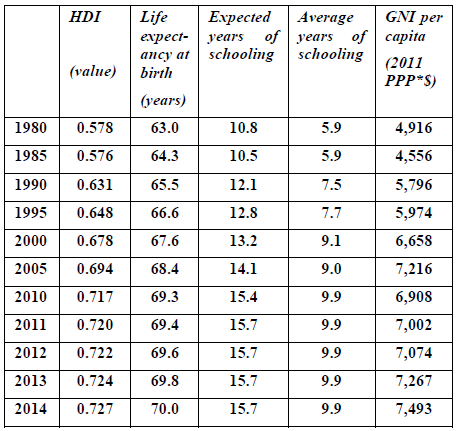 Why use the HDI?

The HDI can be used as a helpful policy tool to make international development comparisons. As human development has

2 New Caledonia and French Polynesia (part of French overseas territories located in Pacific) along with Cook Islands (a self-governing State in free association with New Zealand) are not assessed separately in the HDI analysis.

been uneven across countries, the HDI allows one to compare and question the effectiveness of each country’s Government policies, at the same time providing the platform for discussions on the best way forward.

For example in 2014, Jamaica’s GNI per capita was similar to Fiji’s, but in Jamaica, expected years of schooling and average years of schooling was 3.3 years and 0.2 years shorter than Fiji’s, resulting in Fiji having a much higher HDI value than Jamaica. These differences can encourage discussions and generate the needed changes to government human development policy priorities.

Despite its inherent limitations, the HDI is a useful measure especially for assessing policy choices and effectiveness.

Fiji’s HDI value has increased considerably over the last three decades implying Fijians are living longer, more children are going to school, and the standard of living has increased as more people have access to clean water, basic sanitation and incomes have risen.

While it is remarkable to see the improvement in Fiji’s HDI ranking over the last 34 years, with continued strong economic growth and well-designed national policies, the relevant policies to improve the country’s overall and individual index ranking should continue to be prioritised.

For more details on the Human Development Reports, please refer to: