The RBF is established as an independent institution under the RBF Act (1983) and is fully owned by the Government of
Fiji. The functions and duties of the Reserve Bank are specified in the RBF Act (1983), RBF (Amendment) Decree 2009,
the Banking Act (1995), the Insurance Act (1998), the Exchange Control Act (Rev. 1985), the Financial Transactions
Reporting (FTR) Act (2004), Payment and Settlement Systems Oversight Regulations (2004), the Fiji National Provident
Fund Decree (2011), the Companies Act (2015) and the Fair Reporting of Credit Act (2016).

Section 153 of the 2013 Constitution of the Republic of Fiji also states: –
(1) The RBF is the central bank of the State, whose
primary objects are: –
a) To protect the value of the currency in the
interest of balanced and sustainable economic
growth;
b) To formulate monetary policy;
c) To promote price stability;
d) To issue currency; and
e) To perform other functions conferred to it by a
written law.

(2) In pursuing its primary objects, the RBF must perform its functions independently and without fear, favour, or prejudice, but there must be a regular consultation between the RBF and the Minister responsible for Economy.

(3) The powers and functions of the RBF are those customarily exercised and performed by central banks.

(4) The Governor of the Reserve Bank of Fiji shall be appointed by the President on the advice of the Constitutional Offices Commission, following consultation with the Minister responsible for Economy.

(5) A written law must provide for the composition, powers, functions and operations of the RBF.

The Vision of the Bank is “Leading Fiji to Economic Success” and is supported by the Mission statements and a set of Values.

The Board comprises the Governor, who serves as the Chairman, the Permanent Secretary of the Ministry of Economy, as an ex-officio member, and five other non-executive members. Under the RBF Act, the Minister for Economy appoints the Directors. The
Directors may hold office for a period not exceeding three years but are eligible for re-appointment. Ms Makereta Konrote, Permanent Secretary for Economy, is an ex-officio member appointed on 11 January 2016. Other Board Directors holding office as at 31 July 2019 were Mr Pradeep Patel, Mr Tevita Kuruvakadua and Mr Tony Whitton (OF).

Under the RBF Act, the Board is required to meet at least ten times in a calendar year. Four Directors form a quorum for a meeting of the Board. In the absence of the Governor, the Deputy Governor may participate in the Board meetings and is entitled to exercise a vote. The Board met on 12 occasions during the review period. 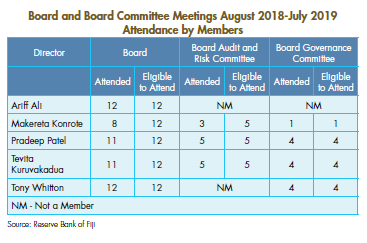 • Reviews and monitors the functions of the external and internal auditors;
• Evaluates the Bank’s accounting control system by reviewing audit reports and monitoring management’s responses and actions to correct any noted deficiencies;
• Reviews accounting policies to ensure compliance with laws, regulations and accounting standards; and

• Reviews the annual financial statements of the Reserve Bank.

During the financial year, the Board Audit and Risk Committee met on five occasions.

Since 2013, the Board has undertaken an annual assessment of its own performance as well as that of its two Committees. From 2017, the Executive Management has also carried out a performance assessment of the Board Directors on an annual basis.
In the review period, the Board undertook an assessment of the Bank’s internal and external auditors. The Board will continue to monitor the performance of its Committees and the auditors annually. In addition, the Board Governance Committee reviews
and approves strategies on terms and conditions of employment for Executive Management and staff. The Committee also reviews and approves strategies on the remuneration policy for all staff. The Board Governance Committee met four times during the review period in the 2018-19 FY.

• the Investment Committee meets monthly to provide strategic direction and oversight of the Bank’s domestic and foreign investments;

• the Information Technology Steering Committee (ITSC) meets quarterly to discuss IT development and operations; and

• the Risk and Business Continuity Management Committee meets quarterly to identify and assess risks and their impact on the business of the Bank, formulate effective strategies to address these risks as well as respond, manage and recover from any incident or crisis faced by the Bank. The Governor chairs all these Committees. Delegation of Authority All activities and expenditure in the Bank must be authorised in accordance with the respective delegations, policies and procedures. The Board receives monthly reports comparing the actual outcomes against budget. The Code of Conduct policy provides guidance on compliance to ethical standards.
The Declaration of Compliance, signed annually by all staff, provides assurance that they have complied with the Code of Conduct, Delegation of Authority, Internal Rules and Orders and all internal policies of the Bank.

The Governor chairs all these Committees.

All activities and expenditure in the Bank must be authorised in accordance with the respective delegations, policies and procedures. The Board receives monthly reports comparing the actual outcomes against budget. The Code of Conduct policy provides guidance on compliance to ethical standards. The Declaration of Compliance, signed annually by all staff, provides assurance that they have complied with the Code of Conduct, Delegation of Authority, Internal Rules and Orders and all internal policies of the Bank.

The Delegation of Authority is updated regularly to ensure that it is current.

The Bank’s 2014-18 Strategic Plan guided the operations and outputs of the Bank throughout the FY, which are linked to its 2018-19 annual work plan. Heads of Group are responsible for ensuring that planned outcomes are achieved. A review of how the Bank was progressing in terms of the implementation of the 2014-18 Strategic Plan was undertaken in February 2019. Some re-prioritisations
were approved during the year as the Bank diverted resources to outputs needing urgent attention. The RBF 2014-18 Strategic Plan end date was extended to August 2019, to be in line with the Bank’s Work Plan cycle and conform with Government’s planning cycles, which is from August to July. The Bank’s next Strategic Plan is from 1 August 2019 to 31 July 2024.

A robust strategic planning process was initiated early with numerous sessions engaging key stakeholders for the review and completion of the previous plan and strategising for the next Strategic Plan. A survey was also carried out to obtain stakeholder feedback and assess the organisation’s functions to enhance its role further. New initiatives in the lead up to the Strategic Plan review process included a bottom-up and topdown approach to discussions. Consequently, the vision of the Bank was retained as majority of the staff maintained it was still relevant, while the mission statements of the Bank were enhanced to suitably
reflect the evolving role of the Bank. An important aspect of the new Strategic Plan is the reinforcement and further development of the culture of excellence by placing a high emphasis on innovation. Success will depend on finding capacity, that is, the right
people with the right tools and the time needed to achieve the strategic priorities in the Plan.

The August 2019-July 2024 Strategic Plan was approved by the Board in July 2019. Monitoring tools were also developed to ensure that there are regular reviews of the plan and reporting to the Board. Chief Managers are responsible and accountable for implementing this Strategic Plan.

In January, the Group strategies were reviewed and the changes were approved in February. Groups reviewed their work progress for the first six months of the fiscal year (August-January) and a report was submitted to the Board.

From February to March, extensive discussions were then held on the new annual work plan. Each Group held an interactive planning workshop and feedback was obtained from both internal and external stakeholders on suggested areas to be considered by the Bank in preparing its annual work plan. Once the annual work plan for the next financial year was established, it was presented to the Board, together with the annual budget for approval in June. In developing the 2019-20 Annual Work Plan, apart from the typical annual outputs, deliberate commitment was made to ensure that the strategic deliverables for year one of the Strategic Plan were clearly identified and incorporated so that these could be accurately monitored and delivered as planned.

The Bank uses zero based budgeting in determining the necessary financial resources for the coming year, based on the work plans submitted by the Groups. In June 2019, the Board approved the annual work plan and budget for the period 1 August 2019 to 31 July 2020.

The Bank is committed to ensuring that effective risk management remains central to all its activities. The Bank regularly assesses its control environment and has in place a risk management framework which comprises a comprehensive list of policies and
procedures and a Corporate Risk Register. These enable the Bank to effectively manage inherent and emerging risks to economic growth and stability of the financial system. The Bank continues to strengthen its risk management framework. The Bank’s primary risks are those directly related to its core mandates of price stability and financial stability.

The Bank identifies risks and implements controls in its operation and management of foreign reserves holdings. Other financial risks that the Bank manages include liquidity risk, credit risk and market risk. Risks related to work processes and inadequacies in
human resources are important to the Bank in ensuring the efficient management of its operations. Ongoing quality management initiatives and capacity building continued to be the focus of the Bank’s development programme.

The Bank began to review its Risk Management Framework in the latter part of 2018 to ensure its continued alignment with the latest standards in risk management practices and relevance to global and domestic developments. As part of this review, the
Bank introduced a Social Media Policy, updated the risk appetite statement and commenced updating all the policies within the framework. Incident Reporting is part of the Risk Management Framework of the Bank. A reporting framework is in place for reporting incidents and monitoring is ongoing to ensure that all incidents reported are resolved, with lessons learnt recorded for future reference.

The Bank’s Business Continuity Plan (BCP) remained in place during the year. The BCP framework includes a Business Resumption Site (BRS) as backup for critical operations should the Reserve Bank’s main building become inaccessible due to an emergency
or a disaster or if the systems in the building become inoperable. Critical operations include foreign reserves management, finance management, settlements and some domestic market processes, including FIJICLEAR operations. The BRS also houses
the Bank’s archives. Best practice requires that BCP procedures are regularly tested to ensure their effective readiness for emergency situations. The Bank’s crisis communication procedures are established and practised through call trees and emergency evacuation drills continue to ensure awareness of emergency procedures by staff and tenants of the RBF building.

The Bank participated in the National Tsunami Drill with other corporates to raise staff familiarity with the evacuation processes and will continue to conduct such training and drills to enhance disaster preparedness and planning. The Risk Management and Communications Group forms the second line of defence in the management of risks in the Bank and its Middle Office is responsible
for managing risks relating to the Bank’s foreign reserves management operations. Compliance and performance reports are prepared by the Middle Office and discussed at the Investment Committee meetings held monthly.

The audit function as a third line of defence under the Bank’s risk management function continued to provide independent assessments to ensure the effective oversight of risks in the Bank. The internal audit function is outsourced to KPMG Fiji while external audit is undertaken by PricewaterhouseCoopers Fiji. Areas for improvement identified by internal and external audits are addressed as appropriate. The Board, the Board Audit and Risk Committee, the Board Governance Committee and the Risk and
Business Continuity Management Committee also contribute to the review and strengthening of the Bank’s risk management function. 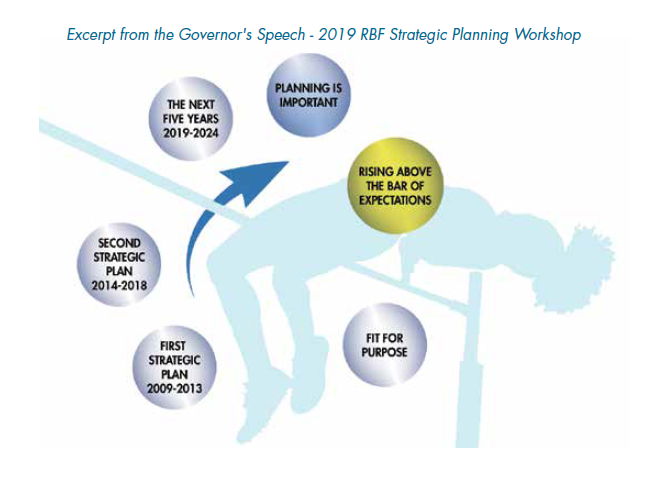