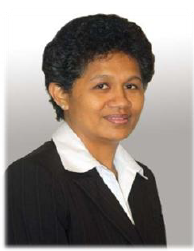 Mrs Caroline Waqabaca was appointed as the Chief Manager Economics with effect from 2 May 2011. Prior to this, Mrs Waqabaca was acting on this position since 21 July 2010. She joined the Bank in 1990 as the Technical Assistant in the Economics Group and had risen through the ranks. During 2003 to 2006, Mrs Waqabaca served as the Bank’s Manager Corporate Communications and has performed acting responsibilities as the Chief Manager on several occasions.

Mrs Waqabaca graduated with a Bachelor of Arts Degree at the University of the South Pacific in 1989 and completed Selected Banking Courses in Banking, Accounting and Legal Systems from the then Fiji Institute of Technology in 1993. Mrs Waqabaca completed the Postgraduate Diploma in Economics from USP in 2000. She also attained her Master of Public Policy from the Graduate Institute for Policy Studies in Japan in 2007.

Mrs Kumar has been acting as the Chief Manager Currency and Corporate Services since February 2010.
She attained her Bachelor of Arts degree from the University of the South Pacific in 1991. Prior to joining the Bank, Mrs Kumar has worked in several private firms as Chief Financial Officer, Accountant, Financial Controller and Senior Accountant.

In announcing these appointments, the Governor and Chairman of the Board, Mr Barry Whiteside said that the Bank was pleased to fill these senior positions which will assist the Bank to deliver its growing and challenging role in the nation.