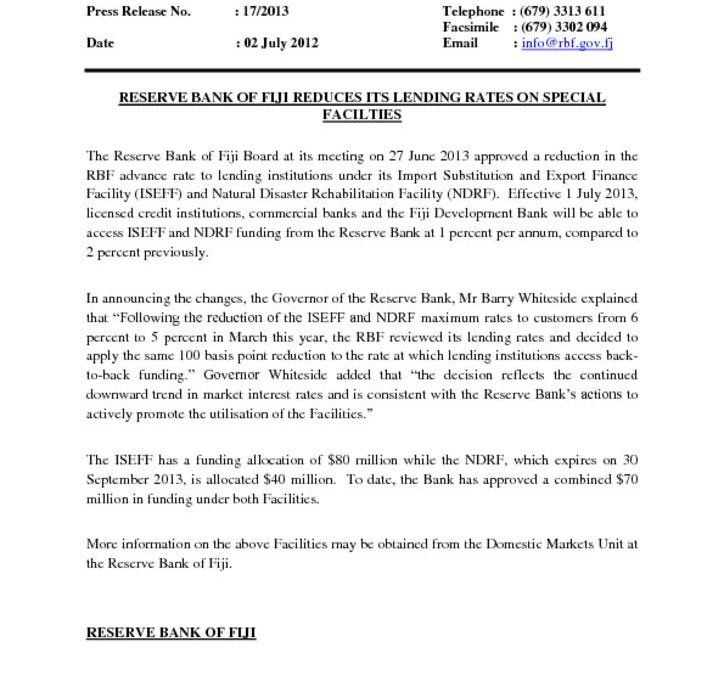 The Reserve Bank of Fiji Board at its meeting on 27 June 2013 approved a reduction in the RBF advance rate to lending institutions under its Import Substitution and Export Finance Facility (ISEFF) and Natural Disaster Rehabilitation Facility (NDRF). Effective 1 July 2013, licensed credit institutions, commercial banks and the Fiji Development Bank will be able to access ISEFF and NDRF funding from the Reserve Bank at 1 percent per annum, compared to 2 percent previously.

In announcing the changes, the Governor of the Reserve Bank, Mr Barry Whiteside explained that “Following the reduction of the ISEFF and NDRF maximum rates to customers from 6 percent to 5 percent in March this year, the RBF reviewed its lending rates and decided to apply the same 100 basis point reduction to the rate at which lending institutions access backto-back funding.” Governor Whiteside added that “the decision reflects the continued downward trend in market interest rates and is consistent with the Reserve Bank’s actions to actively promote the utilisation of the Facilities.”

The ISEFF has a funding allocation of $80 million while the NDRF, which expires on 30 September 2013, is allocated $40 million. To date, the Bank has approved a combined $70 million in funding under both Facilities.

More information on the above Facilities may be obtained from the Domestic Markets Unit at the Reserve Bank of Fiji.