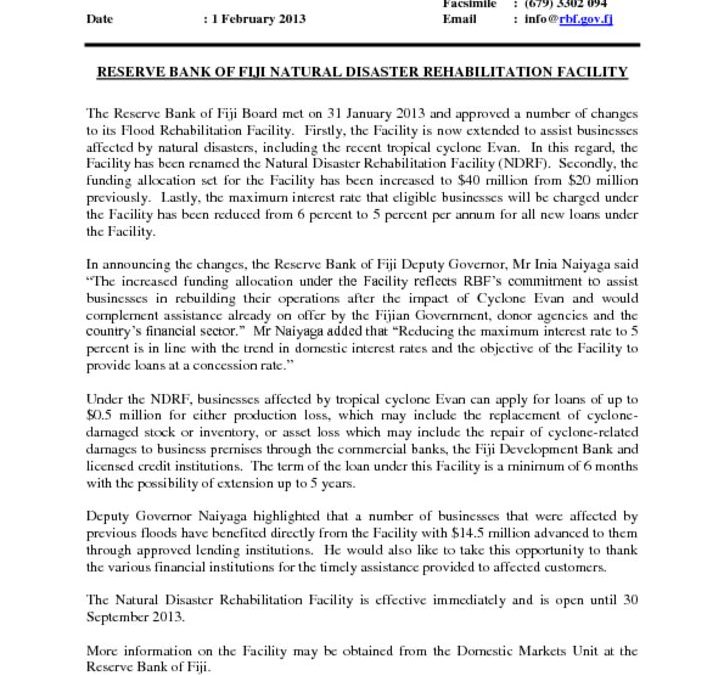 In announcing the changes, the Reserve Bank of Fiji Deputy Governor, Mr Inia Naiyaga said “The increased funding allocation under the Facility reflects RBF’s commitment to assist businesses in rebuilding their operations after the impact of Cyclone Evan and would
complement assistance already on offer by the Fijian Government, donor agencies and the country’s financial sector.” Mr Naiyaga added that “Reducing the maximum interest rate to 5 percent is in line with the trend in domestic interest rates and the objective of the Facility to provide loans at a concession rate.”

Under the NDRF, businesses affected by tropical cyclone Evan can apply for loans of up to $0.5 million for either production loss, which may include the replacement of cyclone damaged stock or inventory, or asset loss which may include the repair of cyclone-related damages to business premises through the commercial banks, the Fiji Development Bank and licensed credit institutions. The term of the loan under this Facility is a minimum of 6 months with the possibility of extension up to 5 years.

Deputy Governor Naiyaga highlighted that a number of businesses that were affected by previous floods have benefited directly from the Facility with $14.5 million advanced to them through approved lending institutions. He would also like to take this opportunity to thank the various financial institutions for the timely assistance provided to affected customers.

The Natural Disaster Rehabilitation Facility is effective immediately and is open until 30 September 2013.

More information on the Facility may be obtained from the Domestic Markets Unit at the Reserve Bank of Fiji.