The Prime Minister in his speech stated “Today I am extremely proud to show our Olympic heroes just how much pride their grateful nation takes in their win. They will be immortalized on our national currency”.

The Governor and Chairman of the Board, Mr Ariff Ali remarked that “Our latest offering features Fiji’s men and for the first time ever, our Fijiana players. We are so proud of our athletes and this $7 banknote which celebrates Team Fiji’s historic double medal achievement at Tokyo Olympics 2020.”

Governor Ali stated that “There were several compelling reasons behind the decision to commission a special commemorative issue, as alluded by the Prime Minister. Significantly, both teams and officials, had to endure extremely difficult circumstances leading up to the games, lockdowns, quarantine and having to be away from loved ones for months on end. While the nation has become accustomed to the heroics of our men’s 7s team who won back to back gold medals, the ladies exceeded expectations throughout the tournament and captivated attention with their gutsy performances. Their bronze medal win ultimately made the Olympics Games our most successful ever. The backdrop to the achievements at the Tokyo Olympics was the COVID-19 induced suffering back at home and around the world. The two Fijian teams reminded us all of the infinite possibilities
of human endeavor and its ability to transcend boundaries, unite and provide profound hope and inspiration.”

In support of the Fijian Government’s on-going climate change initiatives, the Reserve Bank of Fiji has pledged to offset carbon emissions from the production of this commemorative banknote against one of the planned green initiatives earmarked by the government in due course.

To enhance accessibility to the general public, the commemorative banknote is legal tender and will be issued into circulation through the Reserve Bank of Fiji and the commercial banks from Monday, 28 March 2022. Given its special commemorative nature and the limited number produced, it is expected to be of value as collectors’ items both locally and abroad. Special numismatic collector sets will also be available from the Reserve Bank.

The Reserve Bank would like to record its appreciation to the Fijian Government, the Chairman, Board Directors, CEO and staff of the Fiji Rugby Union, The Fiji Times, the President and officials of the Marist Rugby Club and the banknote printer, Oberthur Fiduciaire based in France, as well as all those who assisted towards the completion of this commemorative issue.

Features of the Commemorative Circulation $7 Banknote 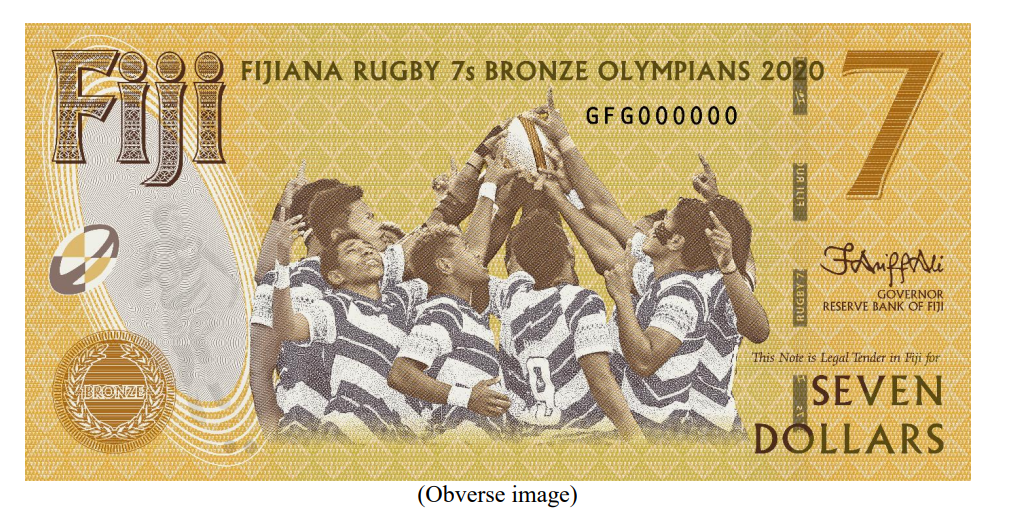 The commemorative $7 banknote is primarily brown on the obverse while yellow on the reverse being synonymous to our gold and bronze medal wins at the Tokyo Olympics 2020. The obverse of the banknote feature the Fijiana Rugby 7s Olympic Bronze Medal Winning Team huddle during the Tokyo Olympics 2020 games, denominational value, horizontal serial numbering, micro text, 2mm metallic thread, watermark of Ms Reapi Ulunisau with a rugby ball, a see-through subject in the form of a rugby ball, bronze medallion and the signature of the Governor of the Reserve Bank of Fiji.

The obverse design also has fluorescent features in the form of some text and the thread. Further, there are two raised dots towards the left hand bottom corner of the banknote which can be clearly felt and are there to help the blind and the visually impaired to authenticate the banknote. 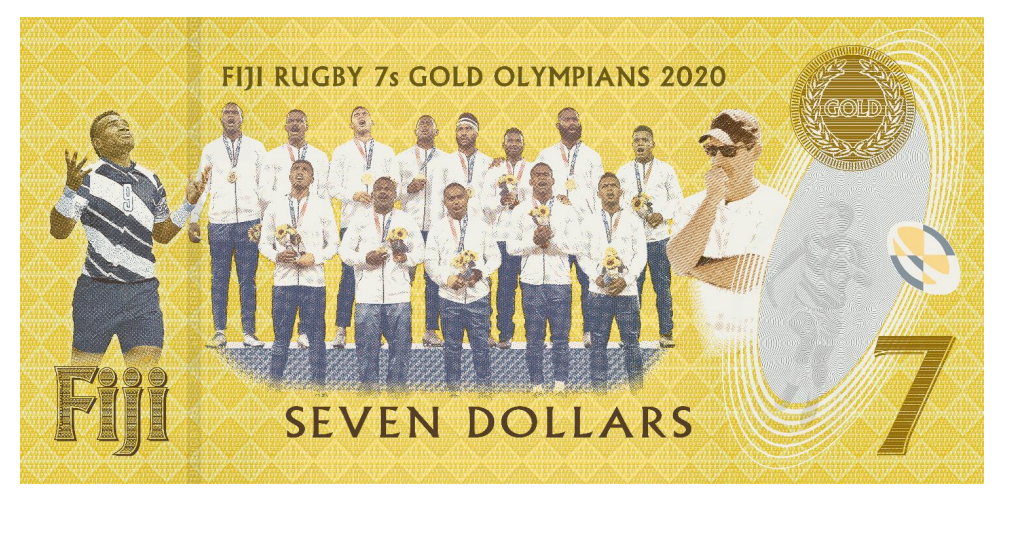 Furthermore, there are fluorescent features in the form of some text, lanyard and players wearing gold medals. A gold medallion is also depicted on the reverse design.