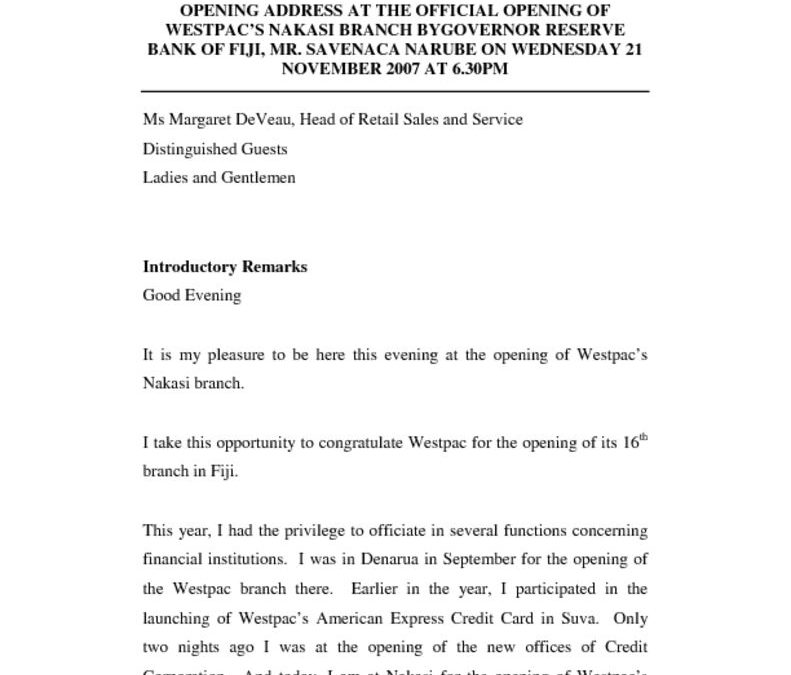 It is my pleasure to be here this evening at the opening of Westpac’s Nakasi branch.

I take this opportunity to congratulate Westpac for the opening of its 16th branch in Fiji.

This year, I had the privilege to officiate in several functions concerning financial institutions. I was in Denarua in September for the opening of the Westpac branch there. Earlier in the year, I participated in the launching of Westpac’s American Express Credit Card in Suva. Only two nights ago I was at the opening of the new offices of Credit Corporation. And today, I am at Nakasi for the opening of Westpac’s newest branch. I am running out of new things to say at these functions! And I am told that this is not the end of it. I understand that there may be another Westpac branch opening in downtown Suva in 2008. And Bank South Pacific intends to open their Nadi branch early in the New Year.

These new branches seem to come in waves. It is a reversal of what happened about ten years ago when commercial banks were closing branches and agencies and we have been asked a few times why that happened. But it is a welcomed reversal. These are excellent signs of the bank’s confidence in the financial system and the country. It is also an excellent development for customers allowing them closer access to banking services.

Today, I have decided to talk only about the financial system and leave the economic policies and projections to the Budget Address on Friday.
We all appreciate the important role that the financial system plays in the economy. It basically allows money to go around from producers to wholesalers, from savers to investors and from customers to retailers. Needless to say, this intermediation role is extremely important to the cash flows of businesses and individuals. The financial system therefore needs to be sound so everyone has the highest confidence in its operations. It also needs to be efficient so we can exchange money as quickly as we can and in the most cost effective manner.

A sound and efficient financial system is also important for investors and savers. Savers would only put their money in banks if they are confident that it will be there when they need it. In turn, the banks will lend this money to the borrowers when they are certain that it will get repaid. So at the end of it all, money goes around and everyone is happy.

When we examine our financial system in these terms of soundness and efficiency, we can see that we have come a long way in the last ten years.
Fiji voluntarily subjected its financial system to a Financial Sector Assessment Program by a joint International Monetary Fund and World Bank Mission in 2006. This comprehensive study while pointing out several improvements, confirmed that Fiji’s financial system is sound. With the implementation of these recommendations, we can look ahead confidently to a financial system that is even more versatile in Fiji. This augurs well for businesses, investment and growth.

At this stage, I wish to clarify that the Reserve Bank regulates and supervises only the financial institutions that we licensed. These currently include commercial banks, insurance companies, credit companies and foreign exchange dealers. We have added the Fiji National Provident Fund to the list since 2003. The key intention of this supervision is to protect depositors, the policy holders, members and the financial system as a whole.

One key issue that we monitor closely in our supervision is the quality of the financial institution’s loan book together with the provisioning level that they have allowed. I am pleased to say that despite the economic downturn this year, the quality of the industry’s assets remains intact with more than adequate provisioning. At the same time credit growth has slowed markedly. This is again good from the point of financial stability and soundness.

Efficiency on the other hand very much depends on modernisation, technology and competition. We have seen several initiatives in technology and modernisation on both the individual bank level and the industry wide level. At the individual bank level, we now enjoy modern banking services like EFTPOS, internet and phone banking and ATMs. We can also send money anywhere in the world electronically. In these areas, I am, glad to say that Westpac has been at the forefront of bringing them to Fiji.

On the industry wide front, the Reserve Bank has recently launched FIJICLEAR which is a real time automated payment system. This would improve efficiency in making and receiving payments. FIJICLEAR also help safeguard financial stability. Customers using FIJICLEAR for payments will have their funds delivered the same day compared with 3 to 6 days required to clear cheques. I urge you all to use FIJICLEAR and you can discuss this further with your commercial bank. On competition, this obviously is harder to measure. We can only look at the signs taking into account that our market is relatively small. We now have stronger credit institutions which provide their own brand of credit. It is also interesting to see that that changes in interest rates by one bank leads to other banks doing the same thing. Some financial institutions do not wish to compete on prices but on other things like services. Customers are now able to compare fees and charges. I am therefore of the general view that the financial system has become more competitive in the last ten years.

Another issue that we keep a close eye on is the liquidity in the financial system. By liquidity we mean the amount of money that banks have which they have yet to lend out. This amount obviously fluctuates from day to day. We would not like to keep this too tight as that may adversely affect the bank’s individual operations. At this time, liquidity is at an all time high at over $300 million. We have deliberately allowed this to rise since we have a credit ceiling in place. But it is obviously too high and we would be reviewing this liquidity level when we review the credit ceiling early in the New Year.

When it comes to lending or deposits, interest rate is an important factor. With the high liquidity that we have, interest rates have come down. They are now back at the same level they were in 2005 and in some cases; the rates are lower than in 2005. And I wish to acknowledge that on several occasions Westpac was the first commercial bank to reduce their lending rates. We do not see any upward pressure on interest rates in the foreseeable future.

We are also interested on the products that the banks introduce into the market. Here we see that there have been some very good developments in Fiji. Deposits as well loan products have increased to cater for the diversified needs of the customers. Westpac again has been at the forefront of such developments.

One product that we are keen to push is the Export Finance Facility where eligible exporters can access bank loans at low interest rates. Unfortunately, for some reason, it has not been used much by exporters and the banks. Westpac came to us suggesting some changes to the facility and I thank them for the initiative. We have therefore introduced most of the changes that they suggested and we hope that these changes will make the facility more attractive and facilitate the growth in exports – which we sorely need to improve our balance of payments position. I encourage you to talk to your bank commercial bank or the Fiji Development Bank about this facility.

There were two Cabinet decisions recently that pose considerable interests to the industry. We heard that Cabinet has approved the establishment of a Financial Services Ombudsman Scheme. There are several countries like New Zealand and Australia that has such a scheme and we can learn from their experiences in the operation and the funding of their Ombudsman. When properly set up, this Ombudsman Scheme should help both customers and bankers settle disputes in a timely and efficient manner.
We have also heard that Cabinet has also approved the establishment of a Financial Services Commission. We certainly look forward to government discussing this rather complex issue further with all stakeholders.

Let me turn to the branch that we are opening this evening. I am pleasantly surprised at the development happening in Nakasi. I know the locality very well as I used to live here in the early eighties. In fact, the apartment that we stayed in was at this very site that this complex has been built. There was only the Gulab supermarket and cinema at that time. Now, we have major supermarkets and shopping centers that have set up in this area. I am sure that this growth will continue into the future.

I am therefore pleased that a commercial bank has decided to establish a branch in this busy part of the Suva-Nausori corridor. It makes good business sense for Westpac to establish a branch here. Westpac is the only bank branch for kilometers in any direction. Your customers must be glad that they don’t have to travel far towards Suva or Nausori for their banking services.

I am told that this is a fully-fledged branch which offers a dynamic business centre complete with an interview room and a separate business teller’s area. The new branch will cater not only for businesses, but also residents, visitors and workers of the surrounding business area. The branch services will include international money transfer service, MoneyGram.

The Nakasi branch, like the Port Denarau one, has a modern look and feel and even features a telephone and Internet Banking kiosk in-branch for customers who wish to access Westpac’s Internet or telephone banking services.

Westpac has a long and proud history, serving the Fiji Islands for the last 106 years. The Bank of New South Wales, Westpac’s forerunner is Fiji’s longest continuing bank as well as the first Australian bank to open a branch in Fiji on 12 August 1901. It has grown from a 3-staff operation in 1901 to an operational network of 19 banking (branch and agency) sites offering a full range of retail, commercial and corporate products.

We can all agree that Westpac has played a valuable role in advancing Fiji’s financial system and also its economic development through its services, innovative products and the latest banking technology.

Finally, I would like to thank Mr. John Cashmore and Ms Margaret DeVeau for their kind invitation. Westpac’s recent progress has been interesting with their association with MoneyGram, American Express as well as the opening of 2 branches within 3 ½ months with another one in the pipeline soon. I again congratulate John, Margaret and the Westpac Team on the opening of the Nakasi branch in Fiji. I also wish Westpac all the best in its future endeavours.

I now have much pleasure in declaring this Nakasi branch of Westpac open.