Like any other commodity, money has a price. The price of money is known as the interest rate.

For a person borrowing, interest is the extra amount that is paid to lending institutions for borrowing money from them. In other words, when repaying a loan the borrower pays the amount borrowed (known as the principal) plus some extra money (which is the interest) to the lending institution for using their funds.

How do interest rates affect the economy?

The rate of interest that is offered by financial institutions affects peoples’ decisions on whether to save or spend their money. Usually, when interest rates are high people tend to save or deposit more of their money. By doing so, consumers are postponing their current spending to a later date i.e. keeping money aside for future spending.

Additionally, when interest rates are elevated, people tend to borrow less since it costs more to take out loans today and means lower spending in the future when the loans fall due. Businesses operate the same way, as higher interest rates will raise their business costs and reduce the incentive for borrowing.

The decisions by savers and borrowers affect consumption and investment decisions, and ultimately aggregate demand and overall economic activity. If interest rates are high, people are expected to spend less. More money will go into saving and less will be borrowed for spending on consumption and investment. Conversely, if interest rates are low, individuals and businesses save less as their return on deposits will be low. They are likely to borrow more as the cost of borrowing is cheaper. Consequently, there will be more spending that will boost economic activity.

However, high interest rates are necessary at other times. With limited resources, a persistent increase in demand leads to high inflation. Increased spending also raises our import bill and puts pressure on foreign reserve levels. In such a situation, higher interest rates can help the economy by discouraging people from excessive spending, which would help cool the economy and bring it back to normality.

While high interest rates encourages people to save and provides funds for investment, it cannot be too high. The saving rate is a cost for financial institutions, and if their cost of getting funds/savings from people is high, they may pass this to consumers by increasing lending rates which will ultimately discourage borrowing for consumption and investment.

Therefore, balancing the interests of savers and borrowers is essential in ensuring continued flow of funds from savers to investors.

Liquidity levels, which refer to the funds that the commercial banks deposit at the RBF is one important factor that influences interest rates.1 When faced with liquidity constraints, financial institutions tend to raise interest rates to attract deposits for maintaining sufficient levels of liquidity in order to meet payment obligations and extend credit. While some institutions would transfer this high cost of funds to lenders, others may choose to absorb this extra cost until profits are affected significantly, particularly due to competition. In contrast, healthy liquidity levels are associated with low interest rates that support lending to private individuals, businesses and the public sector.

Hence the announcement of an increase in the OPR represents tightening of the RBF’s monetary policy and vice versa, which feed

1 The issue of liquidity was discussed in detail in an earlier newspaper article titled “Liquidity in Fiji’s Financial System”.

through to commercial banks’ short-term lending and deposit rates and to all the other relevant interest rates in the economy.

Interest rates are also widely cited in the various RBF publications. However, it is important to note that these rates are weighted averages of the different financial institutions’ sectoral rates and loan/deposit values. For example, the commercial banks’ lending rate was 5.78 percent in May 2017. This does not mean that one should expect all banks to lend at this particular rate as the rates offered by each institution and for the different sectors will vary depending on the amount borrowed, collateral and the riskiness of the client. 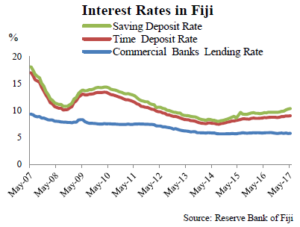 Currently, interest rates in Fiji are at record lows as the RBF has maintained an accommodative monetary policy stance since 2011. This is considered to be appropriate as there are no immediate threats to the RBF’s twin monetary policy objectives of stable inflation and maintaining adequate foreign reserves. The current stance is also expected to support investment and overall economic activity in the medium term.