In normal economic circumstances, if the level of money supply grows faster than the real output, it can cause inflation, hence reducing purchasing power at a point in time. However, inflation is not only influenced by monetary conditions as supply and demand conditions can also lead to price changes. For instance, supply shocks caused by disruptions in production (such as from natural disasters) or higher production costs (such as from increases in wages, rent or oil/fuel prices) lead to “cost push inflation” as these factors limit the supply of goods and services. Similarly, “demand pull inflation” can result from policies such as increased government spending or accommodative monetary policy which can lead to higher demand for goods and services that exceeds an economy’s production capacity.

In Fiji, the Fiji Bureau of Statistics (FBOS) conducts a monthly survey to measure changes in prices of a fixed basket of goods and services typically consumed by urban consumers. This is then used to calculate the consumer price index (CPI) which is classified into twelve categories and assigned weights based on consumption patterns identified in a separate survey called the Household Income & Expenditure Survey (HIES) (Chart 1). 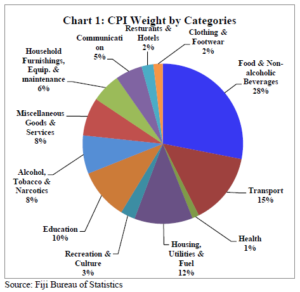 As with other developing economies, expenditure on food constitutes a significant proportion of an average person’s income in Fiji. Food has a weight of 28.3 percent in our CPI basket and it has more impact on the overall inflation rate given the high weight. For example, in March 2017, the food and non-alcoholic beverages index rose by 3.0 percent and contributed 1.0 percentage point towards the overall inflation rate of 5.6 percent. In contrast, the furnishing, household equipment & routine household maintenance category which has a lower weight of 5.9 percent, rose by a similar 3.4 percent over the year but contributed only 0.2 percentage point towards the headline inflation.

A general improvement in the economy, higher wages & salaries or lower taxes can raise disposable incomes and consequently boost demand or spending on certain food types. Additionally, changing preferences and diversification of diets can have similar effects on demand for certain food categories. As a result of the increased demand, firms would raise prices to clear the market as raising production to meet the higher demand would take time.

Both domestic and international factors can affect the supply of food products or raise their cost of production and push domestic prices higher.

Global Food Prices – Fiji is a net importer of many basic food items such as rice, wheat, dairy and meat products and any significant increase in global prices for these items would impact the prices that are paid domestically. One of the indicators for global food price is the United Nations’ Food and Agriculture Organization’s (FAO) food price index. Another indicator is Fiji’s trading partners’ inflation where higher prices in source countries either due to demand or supply factors can affect the prices Fiji importers pay for imports. Similarly, movements in the exchange rates of our major trading partner currencies could also affect the prices that Fijian consumers pay for imported items. A weaker Fiji dollar relative to a trading partner’s currency would result in a higher price for our imports. Therefore, any significant movement in trading partner inflation, exchange rates or global food prices would have an effect on the domestic inflation rate.

Natural Disasters – Fiji, like other Pacific Island countries, is highly exposed to natural disasters such as cyclones, floods and droughts, all of which result in supply shortages and cause price hikes in local fruit, vegetables and root crops. For example, Cyclone Winston affected Fiji in February 2016 resulting in a significant shortage of some of the locally grown crops for a couple of months. This led to a significant increase in overall inflation in 2016.

Given that food is a necessity for survival and that an average person spends a considerable portion of their income on food, the Fiji Government has in place a number of policies to ensure that increases in food prices are moderate. In doing so, the Fiji Commerce Commission (FCC) is mandated by the Government to control prices in industries where competition is limited or is likely to be lessened and where it is necessary or desirable to control the price of a particular good or service in the interests of consumers or suppliers. Food items that are under price control require approval from FCC for any price change and some of the major ones are rice; milk; canned fish; cooking oil; flour, tea and bread. This mechanism allows for a steady and accounted review of price movements so that inflationary pressures are controlled as much as possible. Apart from price controls, there are also various government initiatives in place to help farmers re-start planting after natural disasters to ensure supply resumes quickly and temporary price hikes subside. Such Government assistance includes provision of seeds, fertilizers, farming equipment and technical advice. The Reserve Bank of Fiji as part of its monetary and exchange rate policy also maintains a fixed exchange rate which acts as nominal anchor for inflation by keeping Fiji dollar fixed against a basket of Fiji’s major trading partner currencies to ensure predictability of the exchange rate and import payments.

Food inflation is an important issue for consumers given that food is necessary for survival and food expenditure accounts for a high proportion of their income. However, changes in the prices of food items or food inflation are dependent on various supply and demand factors, some of which are beyond the control of policymakers.