The growing recognition of the importance of forests and its benefits has come under the spotlight as policy makers aim to conserve forest areas and ensure its sustainability by protecting them against extensive exploitation.

Economic indicators such as employment in the sector; contribution to Gross Domestic Product (GDP) (i.e. value addition by the forestry sector) and trade balance (i.e. the value of exports and imports of forestry products) are used as common measures of activities in the forestry sector.

1 The Ministry of Forests issues harvesting license for around five percent of mahogany forests. The rest are under the jurisdiction of the Fiji Hardwood Corporation Limited (FHCL).

It is estimated that Fiji is covered by approximately 1.1 million hectares (ha) of forests, representing 56.0 percent of the total land area (Global Canopy Programme, 2017). This includes 526,453ha of native forest, 76,171ha of pine forest and 54,000ha3 of mahogany forest. Fiji’s major forest commodities include mahogany, pine & woodchips, sandalwood and teak.

In the last six years, around 40,961 cubic metres (m³) of native, 60,163m³ of mahogany and 338,575m³ of pine logs have been produced on average per year (Chart 1). However, there remains potential to increase production further without affecting sustainability.4 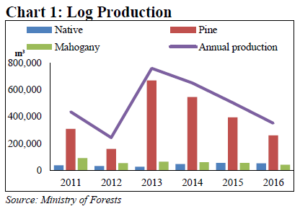 2 Carbon sinks are natural systems that absorb carbon dioxide from the atmosphere.
3 This only includes mahogany planted by FHCL.
4 The annual sustainable yield for native species is 100,000m³, mahogany 120,000m³ and pine 400,000m³. Sustainable yield means extracting forestry resources at a rate that maintains their regeneration capacity.

The forestry and logging sector’s share of total GDP is only 0.6 percent. However, output from the sector is also used as a valuable input into manufacturing processes which includes sawmilling and planing of wood as well as the manufacture of wood products – and this has a share of 0.7 percent. Therefore, the total share of GDP comes to around 1.3 percent of GDP.

The forestry sector is largely dependent on the activities of two major players which are Tropik Woods Fiji Limited (TWIL) and Fiji Hardwood Corporation Limited (FHCL). TWIL is involved in pine log production and majority of these logs are converted into woodchips and exported to markets such as Japan and China, while others are transformed into pine poles, posts and sawn timber. Woodchip production is dependent on market demand and the relatively low global demand last year led to a decline in pine log and woodchip production to 253,655 and 189,850 tonnes respectively, the lowest annual performance recorded in the last six years. Cumulative to July 2017, 78,225 tonnes of pine logs were produced; an annual decline of 52.9 percent. As a result woodchip production declined by an annual 51.4 percent to 61,772 tonnes.

Grades 1 and 26 mahoganies withdrew. FHCL was able to clear some logs through the issuance of a special license. FHCL and the Mahogany Industry Council (MIC) have now restructured mahogany licenses and 13 new licenses have been issued. Under new license structure, ‘cross-purchasing’7 has been introduced, in addition to ensuring that at least two license holders share each of the five grades of logs to avoid stock piles and avoid a repetition of the previous scenario where the pulling out of the sole licensee led to a halt in production. Given the new licenses restructure, FHCL is now expecting to produce around 80,000m³ of mahogany per year.8

Fiji’s main timber related exports are woodchips followed by mahogany and other wood products. Total timber exports increased consecutively from 2012–2015 and averaged $84.0 million (Chart 2). In 2015 alone, total timber export earnings were the highest ever recorded at $93.2 million; however it fell by 31.5 percent to $63.8 million in 2016. Woodchips remains the major forestry export earner for Fiji to date except for the years 2011 and 2012 when mahogany receipts were higher. This was driven by increased demand for locally branded mahogany by the United States (US) market, coupled with improved supply of mahogany.

6 Mahogany logs are graded based on the diameter of the logs and the number of defects. Grade 1 logs are 65 centimetre (cm) and larger and grade 2 logs range from 55-64cm. Grade A implies no defect in the logs, B allows for two defects and C three defects.
7 This implies that other licensees can buy logs outside their specified grades in a special case when the active license holder is not able to buy its quota within a 24 hour timeframe.
8 Previously, FHCL’s quota for annual mahogany production was 112,000m³. 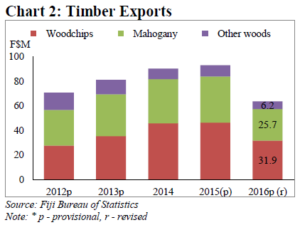 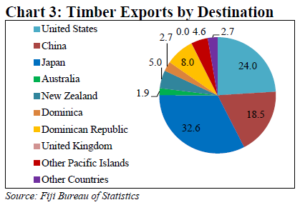 In the 2017-2018 National Budget, the Government allocated $16.0 million to the Ministry of Forests to enforce forestry legislation, and improve sustainable management practices in the development of forest resources.

Key project budget allocations for the forestry sector include $0.3 million to purchase value

9 This includes other European and Asian countries and other American continents.

In addition, new policies to develop pine plantations in maritime regions, improvements in value addition and opportunities to capitalize on wood energy is planned to be introduced.

The forestry sector in Fiji has the potential to contribute more towards exports, GDP growth and employment generation. However, current economic activity in the sector has been largely affected by weak foreign demand, adverse weather conditions and up till recently licensing issues. On an industry level, production by TWIL has become demand driven which restrains the ability to optimize productions to full potential. Due to modernisation, the world is becoming a paper-less society, lowering the demand for paper and subsequently the demand for woodchips. The outlook for the forestry sector is nonetheless positive due to the newly restructured and flexible mahogany licences, and the start of GIMCO Korea Limited’s Nabou Biomass Plant10 and its plans to export wood pellets to Korea.

10 GIMCO Korea Limited and TWIL have formed a joint venture whereby TWIL will supply non-commercial valued logs in the form of woodchips and other residues to GIMCO as input into the furnace to provide steam which powers the turbines for electricity generation.