Labour supply refers to the number of workers that are “willing” and able to work in a particular job or industry at a given wage rate.

This article discusses the factors that generally affect labour supply in a country.

The Determinant Factors for Labour Supply

The working population of a country, also known as the labour force, refers to the number of people 15 years of age and above, who are willing (choose to work) and able to work. 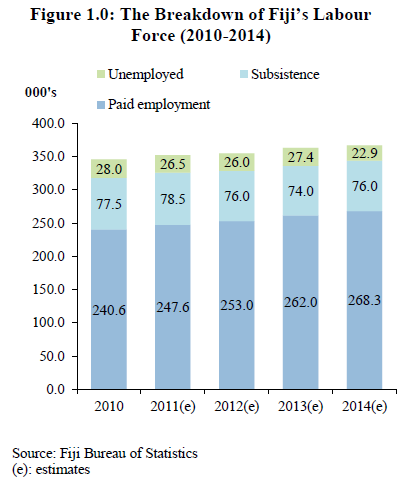 Another factor that can influence labour supply is the wage rate offered in the economy and/or industry. Factors that determine the actual wage rate paid would include: the ability of the industry to pay; demand and supply of a particular type of labour/skill; the cost of training; the cost of production and doing business; the bargaining power; and Government regulations.

Fiji, like a number of other countries, has in place a national minimum wage rate of $2.32 per hour. This rate applies to a maximum of 48 hours of work per week and has been effective from 1 July 2015. In addition, casual workers should be paid a minimum of $3.14 per hour for a period of five working days of 9 hours per day or 6 working days of 8 hours per day in a week.1

In theory, the number of people willing to work increases as the wage rate increases and vice versa, hence the upward sloping supply curve (Figure 2.0). However, this does not always happen in practice as there

1 Casual workers are workers whose terms of engagement provide for the worker’s payment to be received at the end of each day’s work and they are not re-engaged within a period of 24 hours after the payment. Source: Government of Fiji Gazette Supplement No.15 Employment Relations (National Minimum Wage) Regulations 2015.

are other factors that affect the decision to work. 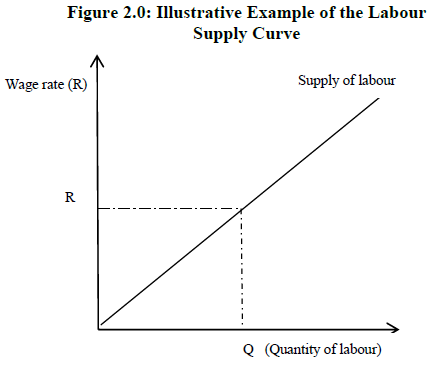 Monetary and non-monetary opportunities/benefits can also impact labour supply. Monetary benefits include performance and salary assessments, paid leave (sick and maternity), provision of education allowance, bonuses, and insurance entitlements by an employer. In addition, there are non-monetary benefits such as comfortable working conditions; job security; holiday entitlement; provision of housing and vehicles; gratuity; and promotion prospects. These benefits encourage individuals to work and increase labour supply in the market.

In most industries and workplaces, potential employers set minimum qualification requirements needed for the particular job thus restraining entrants in those particular fields of occupation. For example, this can be the required number of years of experience or a certain level of education for professional positions such as legal services, doctors and accountants.

The movement of labour or migration abroad changes labour supply levels in a country. People may migrate to other countries for various reasons such as job opportunities, differences in living standards and other personal reasons. This is sometimes referred to as a “brain drain,” which is the loss of skilled workers from a particular country. As a result, labour supply may fall. At the same time, labour from abroad can immigrate for local employment opportunities. The immigration of workers can boost the country’s labour supply.

The supply of labour can change according to a respective business cycle. During a slowdown in economic growth or recession, as businesses consolidate, the possibility of finding a job decreases and individuals can either exit the labour market (choose to no longer seek employment) or search for work opportunities outside the country. As a result, labour supply will fall in the country. The reverse can occur if a country is in the boom period of the business cycle.

The Reserve Bank of Fiji (RBF) monitors various indicators of labour supply developments in Fiji and assesses its impact on the economy. These indicators include data released by the FBOS (such as population, labour force, migration data) as well as information collected from different Government ministries, tertiary institutions and the Fiji National Provident Fund. Information extracted from databases of international organisations like the International Labour Organisation and media releases, is used as well. In addition, the RBF organises industry meetings and frequently liaises with industry stakeholders for key updates on economic developments. These meetings help provide more information on labour developments in the country.