What causes the OPR to move?

In an earlier article, the RBF had explained that it had two objectives of monetary policy; the first is to ensure price stability or maintain the inflation rate at around 3 percent and second, to ensure Fiji has sufficient foreign reserves to cover a minimum of 4 months of retained import payments. Therefore, any movement  in the OPR will depend on the assessment of the impact of economic developments on the outlook for our twin monetary policy objectives.

For example, if current assessments suggest that foreign reserves may fall to critically low levels due to very high import payments related to domestic demand that is too high and therefore unsustainable, this would trigger a tightening of monetary policy. This is necessary in order to safeguard the RBF’s monetary policy objective of maintaining a comfortable level of foreign reserves and make economic growth sustainable. As such, the RBF will raise its OPR to influence an increase in interest rates of commercial banks that will make borrowing more expensive for private individuals’ and corporate bodies. This should ideally dampen the high import growth and therefore stem the decline in foreign reserves.

How are changes to the OPR implemented?

The RBF maintains a monetary policy framework which guides its monetary policy decisions on changes to the OPR. As depicted in Figure 1 below, the OPR is the central interest rate for conducting monetary policy. The Repurchase/Repo Rate (upper limit), the rate at which commercial banks can borrow from the RBF, was initially set at 50 basis points above the OPR. In contrast, 50 basis points below  the OPR was the Banks’ Demand Deposits Rate (lower limit), the rate at which commercial banks earn interest on their deposits held with the RBF.  In recent review of the Monetary Policy Framework,  the width of the corridor on both sides of the OPR was narrowed by 25 basis points.  Consequently, the deposit facility rate was maintained at zero percent while the Repo rate reduced to 0.5 from 1.0 percent. 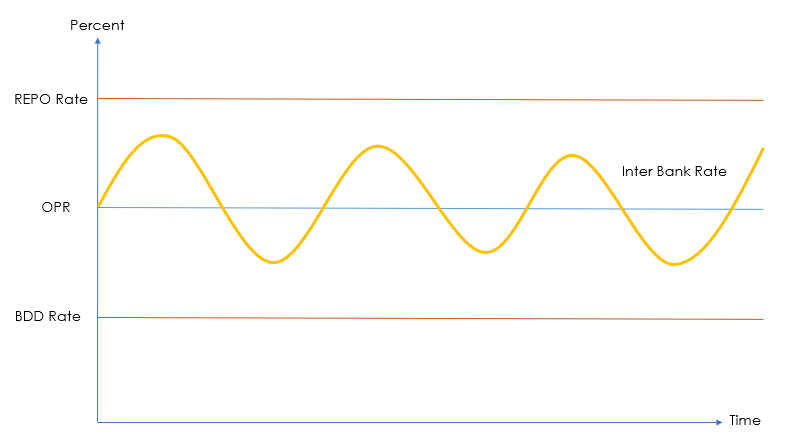 In practice, the RBF sets the OPR and as necessary, conducts open market operations (OMO) by buying/selling its own securities (known as RBF Notes) to add or withdraw money from the banking system in order to affect commercial bank interest rates. In conducting OMO, the RBF seeks to align the overnight interbank rate (the rate of interest at which the commercial banks borrow amongst themselves) with the OPR.

In the case where the RBF decides to raise the OPR, it will sell RBF Notes to commercial banks in exchange for  cash. In doing so, this will reduce the volume of money available – or withdraws liquidity from the banking system – and in turn places upward pressure on the overnight interbank rate. Basically, the RBF  will aim to sell an appropriate amount of RBF Notes that moves the interbank rate to eventually equal the OPR.

More broadly, the RBF intends that changes in the OPR will feed through to commercial banks’ short-term rates and to all the other relevant interest rates in the economy that ultimately will have an impact on the level of investment, consumption and overall economic activity.

Since November 2011, the RBF has maintained its OPR at 0.5 percent, to support investment and economic growth. On 18 March 2020, the Bank reduced the OPR further to 0.25 percent considering the global effects of the recent coronavirus outbreak and its implications on Fiji’s GDP growth and the RBF’s twin monetary policy objectives.