Monetary policy is a process by which the central bank of a country, such as the Reserve Bank of Fiji (RBF), controls and manages the level of money supply in the economy. This is done either by controlling the quantity of money in the economy and/or by influencing the price of money, commonly known to us alas the rate of interest or interest rate.

This article focuses specifically on the RBF’s conduct of monetary policy by influencing interest rates, which we do with two clear end-goals or objectives in mind. The first is to ensure price stability, represented by maintaining average inflation rates at around 3 percent. The second objective is to maintain level of foreign reserves that is sufficient to cover at least 4 to 5 months of our import payments. If inflation-which is the annual rate at which the general price level for a typical consumer changes-is high, it reduces the purchasing power of that consumer. It basically means that when wages and salaries remain unchanged fewer of the higher-priced goods and services can be bought. High inflation also erodes the value of people’s savings and firms’ capital.

Money received from exports, tourists who visit our shores, relatives and workers that live abroad (remittances) and countries/organisations that lend to us all contribute to the foreign exchange reserves for Fiji. Foreign reserves are vital as they helps pay for Fiji’s imports which we are not able to produce ourselves. They also help pay our external debt obligations. All these payments are usually done in the currencies of our major trading partners such as Australia, New Zealand, the United States, Japan and the Euro zone. Therefore, it is critical that we always maintain an adequate level of these foreign-currency assets to make these important and necessary payments. It is also important that we try to maintain price stability in order to protect both the purchasing power of domestic consumers and ensure some return on financial assets for both households and businesses. In summary, the RBF’s twin monetary policy objectives of maintaining low inflation and healthy foreign reserves are important for ensuring sustainable economic growth and a sound macroeconomic environment.

The formulation of monetary policy in the RBF is done on a monthly basis, beginning at the Policy Coordination Committee level. It is here that our Economics Group assesses the impact of recent and on-going economic developments on the twin monetary policy objectives of low inflation and adequate foreign reserves for the immediate and near terms. The recommended monetary policy stance for the month is then submitted and discussed extensively by the Monetary Policy Committee(MPC)chaired by the Governor and comprising RBF Executive Management. Following MPC’s endorsement the policy stance is then submitted to the RBF Board for discussion and final approval before adoption.

When the RBF talks about monetary policy, it generally is focusing on the intended path for its policy/official rate, called the Overnight Policy rate (OPR). This is the rate through which the RBF communicates its monetary policy stance. Hence the announcement of an increase in the OPR represents a tightening in the RBF’s monetary policy and vice versa. The intention and general expectation is that changes in the OPR will feed through to commercial banks’ short-term rates and to all the other relevant interest rates in the economy. The RBF sets the OPR and may then conduct open market operations (OMO) by buying/selling its own securities (known as RBF Notes)to add or withdraw money in the banking system. By doing this we are working to align the overnight interbank rate (the rate of interest at which the commercial banks borrow amongst themselves) with the OPR level. Where the overnight interbank rate is below the OPR, the central bank will issue its own RBF notes to investors who will pay the central bank for these securities. This has the effect of not only taking money out of the financial system, but also places upward pressure or edges up the overnight interbank rate to align with the OPR. Since November 2011, the RBF has maintained its OPR at 0.5 percent, consistent with its accommodative policy of keeping interest rates low to support growth and investment in the economy.

On 18 March 2020, the Bank reduced the OPR further to 0.25 percent considering the global effects of the recent coronavirus outbreak and its implications on Fiji’s GDP growth and the RBF’s twin monetary policy objectives.  Additionally, the width of the corridor on both sides of the OPR was narrowed by 25 basis points.  Consequently, the deposit facility rate was maintained at zero percent while the Repo rate reduced to 0.5 from 1.0 percent. 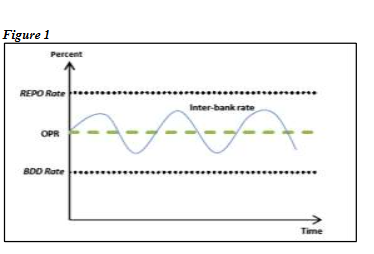 It is important to note that the effectiveness of monetary policy through the use of the OPR to influence changes in the economy, relies on an efficient and responsive market. While the RBF may do all in its powers to properly assess the impact of economic developments on its twin objectives, we are still dependent on market forces to yield the intended outcomes. These outcomes range from changes to commercial banks’ and other financial institutions’ short-term rates and then on to eventually have a bearing on aggregate demand(either for investment or consumption purposes)and eventually to overall economic activity. In that regard, the RBF regularly conducts consultations with market players such as financial institutions, businesses and the public sector to solicit views on market expectations and the economic outlook. These represent a critical input into monetary policy considerations by the RBF as it aims to balance its price and foreign reserves objectives while supporting economic growth. Moreover, the RBF has other monetary policy tools at its disposal which may also be used when indirect measures such as interest rates are slow in generating the intended macroeconomic outcomes