In January 2010, the Reserve Bank of Fiji (RBF) issued its Supervision Policy on Complaints Management to the Licensed Financial Institutions (LFI’s)1.

In the fourth quarter of 2015, 23 complaints were referred to the RBF for mediation and resolution.

This was an increase from 16 complaints received in the third quarter of 2015. Similarly, an increase was noted in the

complaints received when compared to the same period last year. 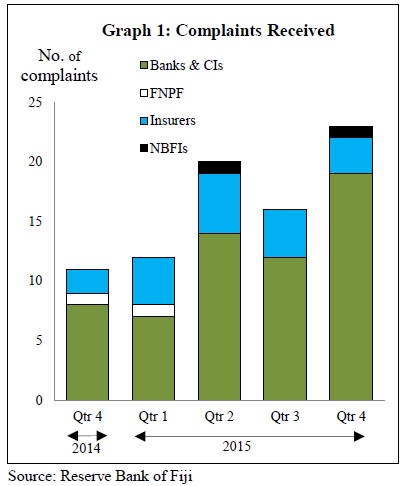 In the review quarter, eight complaints remained unresolved. All of these are currently being assessed by the financial institutions (Table 1). 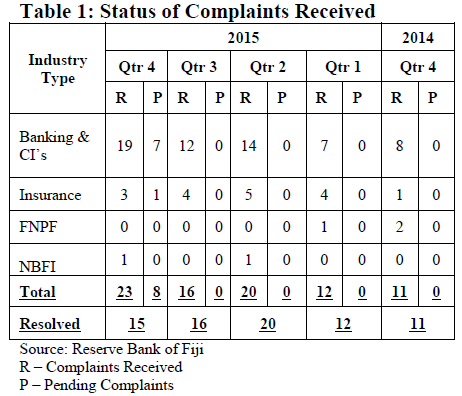 For the December 2015 quarter, 65 percent of the complaints were resolved.

Resolution to these complaints included reversal of fees and charges, bringing the complainant and LFI together to better understand their rights and duties, processing of Telegraphic transaction and rebate of interest charged to loan account.

The complaints received by the RBF against the insurance industry were on motor vehicle insurance and claims handling process on declinature of claims (Graph 2). 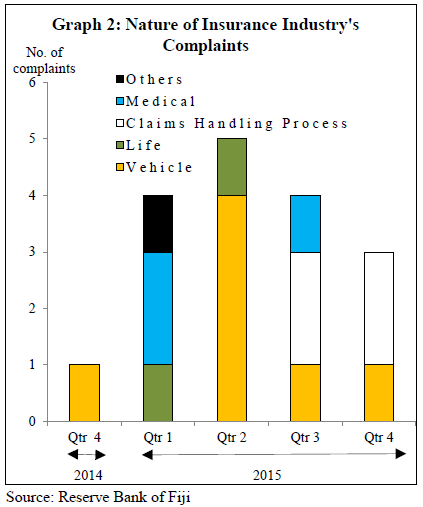 The nature of complaints received by the RBF on the banking and credit institutions were mainly on fees and charges, fraud, loans and mortgages (Graph 3).

During the quarter, the RBF held eight meetings with complainants to resolve their complaints.

In addition, the RBF held two meetings with financial institutions. These meetings involved mediation and clarification of issues raised by complainants. 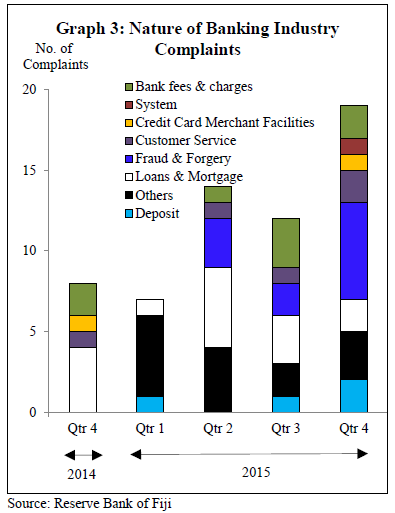 In the review quarter, one staff attended the Consumer Protection and Market Conduct Training from 18-20 November 2015 that was organised by Alliance for Financial Inclusion in Tonga.

The RBF also attended the Open Forum on “Consumer’s Right to Redress in Financial Services” held on 7 December 2015 which was organised by Consumer Council of Fiji. The Deputy Governor was a panelist at the Forum.