In January 2010, the Reserve Bank of Fiji (RBF) issued its Supervision Policy on Complaints Management to the Licensed Financial Institutions (LFI’s).1

In the second quarter of 2015, 20 complaints were referred to the RBF for mediation and resolution.

This was an increase from 12 complaints received in the first quarter of 2015. However, a decrease was noted in the

complaints received when compared to the same period last year. 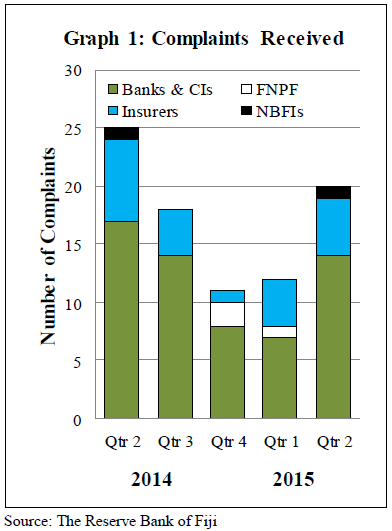 In the review quarter, six complaints remained unresolved. One complaint is currently being assessed by RBF while the remaining five complaints have been forwarded to LFIs for clarification (Table 1). 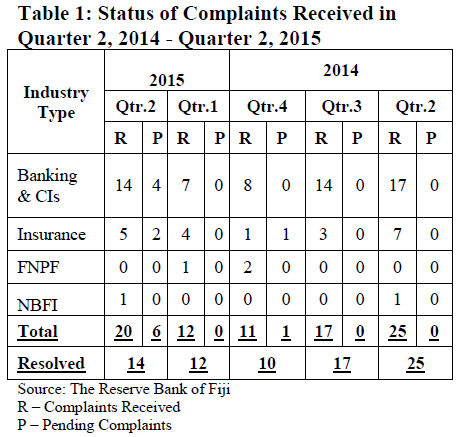 For the complaints received in the December 2014 quarter, one remained unresolved. This complaint has been forwarded to the relevant LFI for clarification. RBF has met with the LFI on the complaint and is awaiting a response on the issues raised.

For the June 2015 quarter, 70 percent of the complaints were resolved.

Resolution to these complaints included reversal of fees and charges, bringing the complainant and LFI together to better understand their positions, payment of unclaimed monies and rebate of interest.

The complaints received by the RBF against the insurance industry were on life insurance policy payout and vehicle claims (Graph 2). 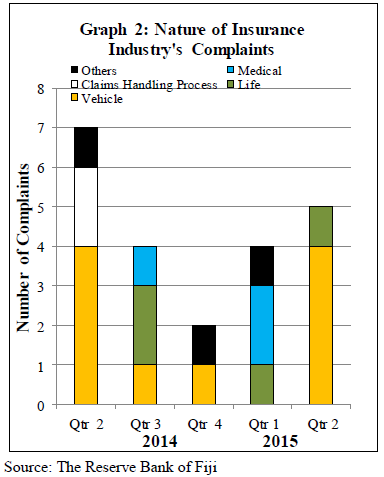 The nature of complaints received by the RBF on the banking and credit industry were mainly on lending, mortgage and fraud (Graph 3). 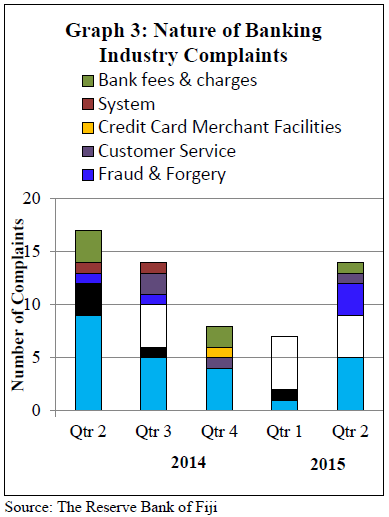 During the quarter, the RBF held nine meetings with complainants to address their complaints.

In addition, the RBF held four meetings with financial institutions. These meetings were on mediation and clarification on issues raised by complainants.

One onsite examination of LFIs (New India Assurance) was conducted by the RBF to ensure compliance with the Policy Guideline on Complaints Management.