In January 2010, the Reserve Bank of Fiji (RBF) issued a Supervision Policy on Complaints Management to the Licensed Financial Institutions (LFIs)1.

The Policy requires LFIs to implement a Complaints Management Framework that will effectively and efficiently resolve complaints by customers of LFIs. The Policy also enables customers who are dissatisfied with the outcome of their complaints with the LFIs to refer their complaint to the RBF for mediation and resolution.

In the first quarter of 2015, 12 complaints were referred to the RBF for mediation and resolution.

The majority of complaints received were related to the banking and insurance sector (Graph 1). 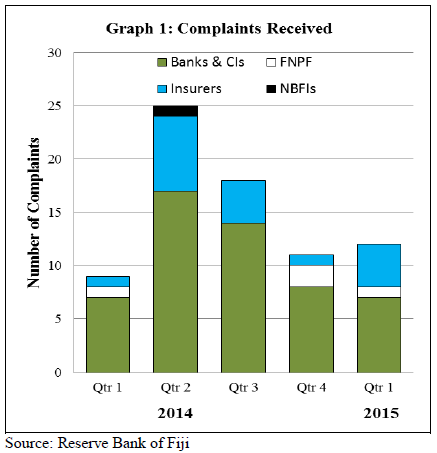 In the review quarter, five complaints remained unresolved. Of this, one complaint is currently being assessed by RBF while the remaining four have been forwarded to LFIs for clarification (Table 1). 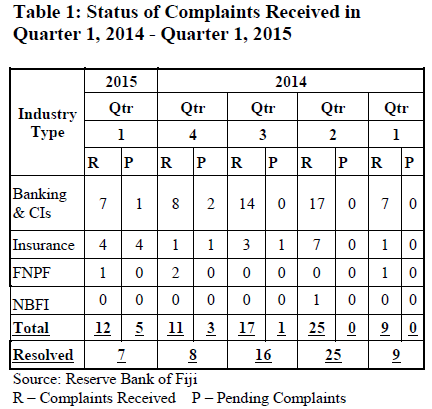 For the complaints received in the December 2014 quarter, three remained unresolved. Of these, two complaints have been forwarded to LFIs for clarification and one is being assessed by RBF. For the third quarter 2014, one complaint is still open as the complainant had a medical condition and could not be contacted but he has contacted RBF and wants to continue with the complaint. RBF had mediation on the complaint with all parties and is awaiting the complainant to respond on the offer made to him by the LFI.

For the March 2015 quarter, 58 percent of the complaints have since been resolved.

Resolutions to these complaints included accounts restructure, bringing the complainant and LFI together to better understand their positions, information on interest rate charged, copy of insurance policy provided to policy holder and mortgagee sale.

The complaints received by the RBF against the insurance industry were on medical claims, property insurance and life insurance policy payout (Graph 2). 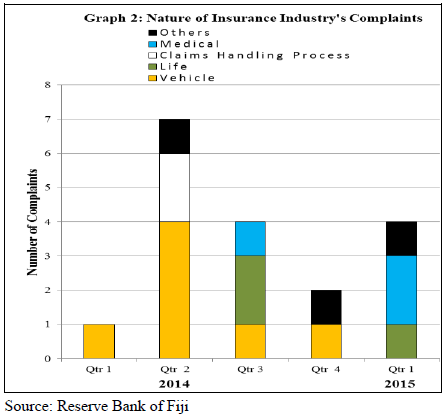 The nature of complaints received by the RBF on the banking industry were mainly on lending, mortgage and deposits (Graph 3). 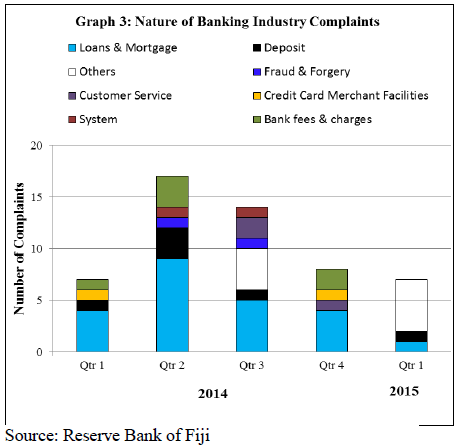 During the quarter, RBF held nine meetings with complainants to address their complaints.

In addition, the RBF held five meetings with financial institutions. These meetings were on mediation and clarification on issues raised by complainants.