The Reserve Bank of Fiji (RBF) issued Bank South Pacific No.13 on Complaints Management to the Licensed Financial Institutions (LFIs)1 in 2010. The Policy requires LFIs to implement a Complaints Management Framework that effectively and efficiently resolves complaints by customers of the LFIs. The Policy also enables customers who are not satisfied with the outcome of their complaints to further refer their complaints to the Reserve Bank for mediation and resolution. In the second quarter of 2014, 25 complaints were referred to the RBF for mediation and resolution. The purpose of this report is to provide an update on those complaints. The data in this report does not include the complaints received and resolved by the LFIs themselves in the second quarter of 2014.

The number of complaints received increased

by 16 over the quarter to 25. When compared with the same period last year, the number of complaints rose by 7.

The majority of complaints received were related to the banking and insurance sector (Graph 1). 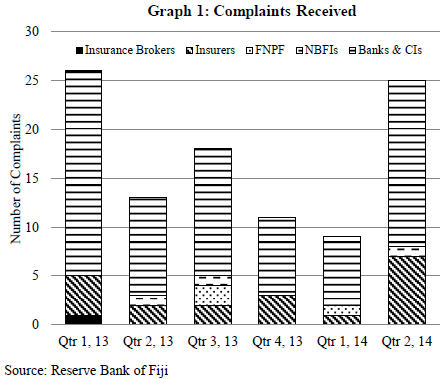 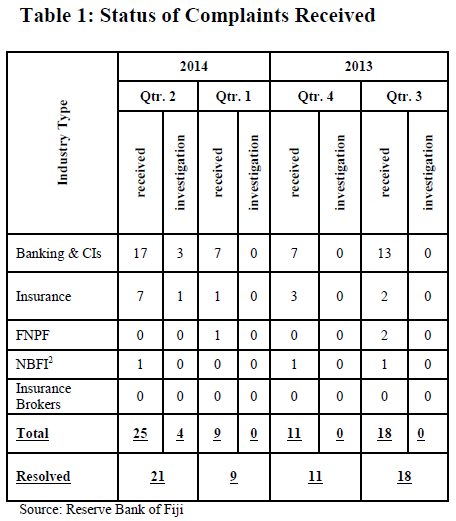 In the review quarter, 4 complaints remained unresolved. Of this, 2 complaints are currently being assessed by RBF while the remaining 2 have been forwarded to LFIs for clarifications.

The complaints received by the RBF against the insurance industry were on motor vehicle claims and the claims handling process (Graph 2). 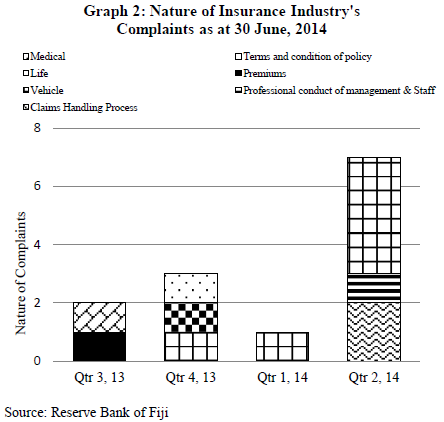 The nature of complaints received by the RBF on the banking industry was mainly on lending and mortgage, fees/charges and deposit (Graph 3). 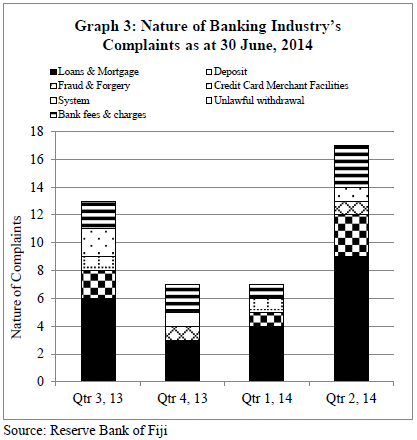 In the quarter, RBF held 9 meetings with financial institutions. These meetings were on mediation and clarification of issues raised by complainants.

The second Complaints Management Forum meeting was held on 1 July, 2014.