In January 2010, the Reserve Bank of Fiji (RBF) issued the Supervision Policy on Complaints Management to the Licensed Financial Institutions (LFI’s)1.

In the fourth quarter of 2014, 11 complaints were received by the RBF for mediation and resolution.

The majority of the complaints received were related to the banking and insurance sector (Graph 1). 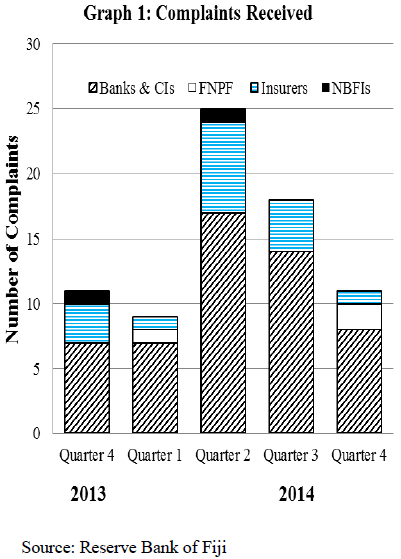 In the review quarter, seven complaints remained unresolved. Of this, one complaint is currently being assessed by RBF while the remaining six have been forwarded to LFIs for clarification (Table 1). 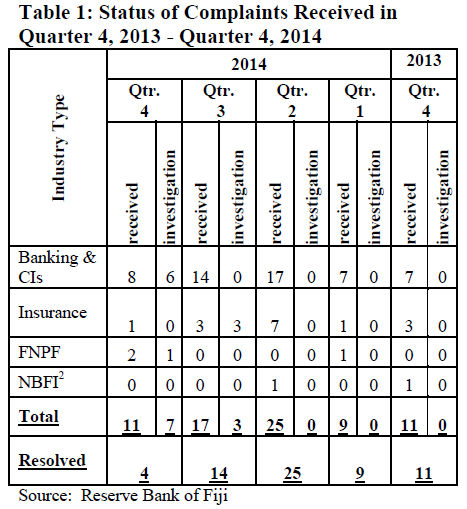 For the complaints received in the September quarter, three remained unresolved. Of this, two complaints have been forwarded to LFIs for clarification and one has been assessed and

forwarded to the complainant to provide more information.

For the December 2014 quarter, 84 percent of the complaints were resolved.

Resolution of these complaints included accounts restructure on the grounds of hardship, refund of basic excess to policy holder, rebate of interest rate charged, copy of insurance policy provided to policy holder or consumer advocate groups, clarification on the declinature of insurance claims and mortgagee sales.

The complaints received by the RBF against the insurance industry were on motor vehicle claims and the claims handling process (Graph 2).

The nature of complaints received by the RBF on the banking industry were mainly on lending and mortgages, fees/charges and deposits(Graph3). 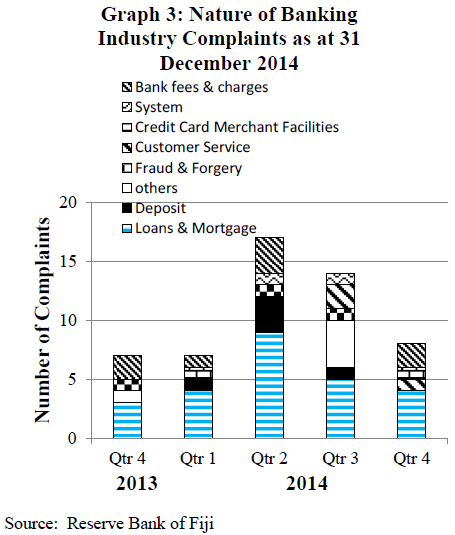 The Complaints Management Forum had its last meeting for the year on 9 December 2014. The Forum also invited members from the Pacific Financial Inclusion Program to discuss consumer protection initiatives in Fiji.