Since 2012 the RBF has also been conducting mediations between Complainants and LFIs to try and resolve complaints amicably. Mediation is a form of Alternative Dispute Resolution (ADR) where the parties themselves reach a consensus decision to resolve their complaints. The Reserve Bank plays a facilitating role in the process. Mediation is an effective and efficient process which is free of charge and enables the parties to avoid the expensive fees charged by the legal system to resolve their complaints.

In the September quarter of 2017, 37 complaints were referred to the RBF for mediation and resolution.

This was an increase from 22 complaints received in the previous quarter and 23 complaints when compared to the same period last year. 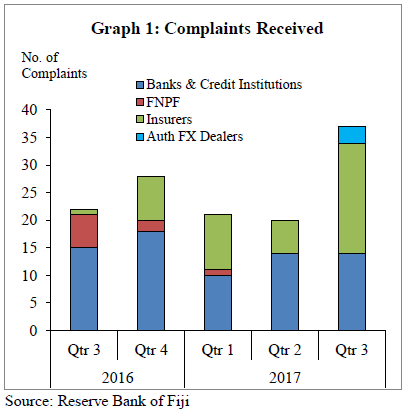 For the review quarter, 27 complaints were resolved and 10 complaints are currently with the LFIs for investigation (Table 1). 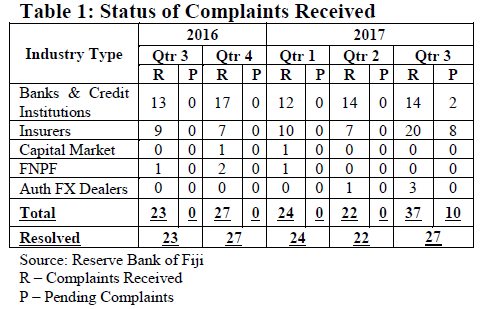 For the September quarter, 73 percent of the complaints were resolved.

Resolution of these complaints included mediation with the parties to better understand their financial commitments, loan repayment arrangements, reversal of fees & charges and claims procedures.

The complaints received by the RBF against insurers were on motor vehicle insurance, medical insurance claims and other insurance related issues (Graph 2). 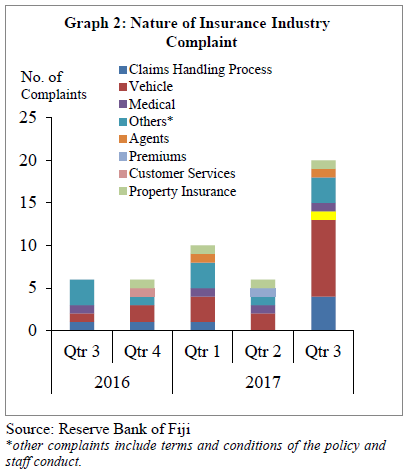 The nature of complaints received by the RBF on the Banks and Credit Institutions were mainly on loans & mortgage, electronic banking, deposits, and fees & charges (Graph 3). 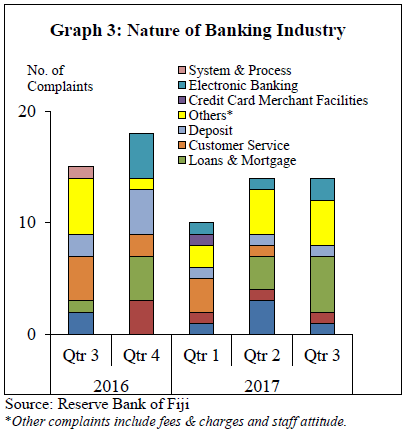 During the quarter, the RBF held 9 consultative meetings with complainants or LFIs to clarify their complaints.

In addition, the RBF held 13 mediation meetings with both complainants and financial institutions to try and resolve their complaints.