As Fiji and other international economies deal with the impact of COVID-19, the subject of interest rates has become topical in public forums. This article provides more information on interest rate movements in Fiji, especially commercial banks’ lending rates, over the past decades and makes comparisons with our neighbouring Pacific Island Countries (PICs) and selected developed and comparable economies.

Money, like any other commodity, has a price attached to it. This price is termed the interest rate. If you are a borrower, interest is the cost of borrowing that money. The interest rate charged to borrowers is known as the lending rate.

Why are interest rates important in an economy?

The interest rates prevailing in a country influence people’s decision to borrow or save and ultimately how much they spend. As such, interest rates are important as they can stimulate or reduce economic activity, particularly consumption spending and investment activity and ultimately the twin objectives of monetary policy – namely low inflation and an adequate level of foreign reserves. Given this relationship, the Reserve Bank of Fiji (RBF) tries to influence market interest rates by adjusting its key policy rate – the Overnight Policy Rate (OPR) – along with liquidity levels in the banking system to communicate its monetary policy stance to financial and economic stakeholders.

More broadly, the RBF intends that changes in the OPR will feed through to commercial banks’ short- term rates and to other market interest rates that will have an impact on the level of economic activity and its dual monetary policy objectives. Notably, the RBF does not dictate but rather tries to influence market rates through changes in its OPR and liquidity conditions.
Considering the sharp downturn brought about by the current pandemic, most central banks – including the RBF – have pursued an expansionary monetary policy stance to support economic activity. These include the lowering of key policy rates and quantitative easing, which basically refers to injecting liquidity into the financial system.

Fiji’s lending rates have fallen compared to the historical highs of the 1980s and 1990s and are generally in line with the movements in the OPR (Figure 1.0). In effect, the commercial banks’ weighted average lending rate are at historically low levels when compared to the 1980s, when lending rates hovered above 12.0 percent.
While the OPR provides a signal to commercial banks on where the RBF expects rates to trend, other factors also play a role in influencing commercial banks’ interest rates. These key factors include the liquidity and risk tolerance of the banks, competition amongst banks, as well as the demand by both borrowers and depositors.
Commercial banks’ lending rates have generally trended downwards over the past decade reflective of the accommodative monetary policy stance set by the RBF.
In November 2010, the RBF’s OPR was reduced to 2.50 percent from 3.00 percent. This was lowered further to 2.00 percent in February and 1.50 percent in April 2011. In November 2011, the RBF cut its OPR to 0.50 percent and maintained this stance until March 2020, when the Bank trimmed it further to 0.25 percent to provide additional stimulus to the domestic economy. 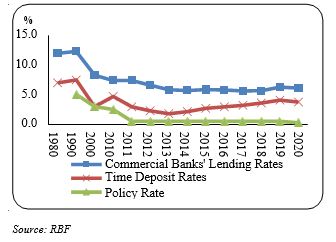 How do Fiji’s lending rates fare against other countries?

For the purpose of this comparative analysis, lending rate data, defined as the rates charged by other depository corporations, has been sourced from the IMF’s International Financial Statistics (IFS) database. Other Depository Corporation mainly includes commercial banks, credit institution, savings institutions and money market mutual funds. In Fiji, lending rates reflected in the IFS are commercial bank lending rates.

On the whole, Fiji’s lending rates have remained competitive in the review period (2009-2019) when compared to a group of selected overseas countries which include our neighbours, several PICs (Vanuatu, Samoa, Solomon Island, and Tonga), developed economies such as Australia, New Zealand and Malaysia and similar economies such as Maldives, Mauritius and Trinidad and Tobago. 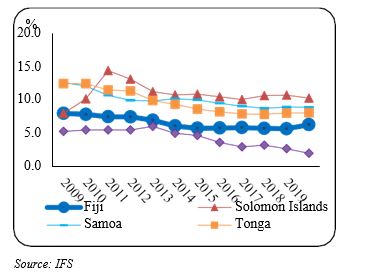 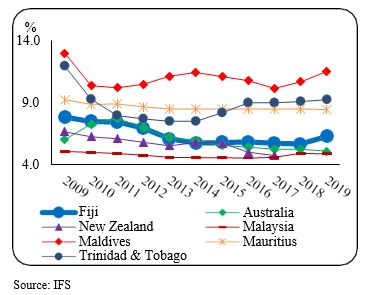 Moreover, at the end of 2019, Fiji’s lending rates were also relatively lower than the average lending rates in Developing and Emerging economies (Table 1.0). 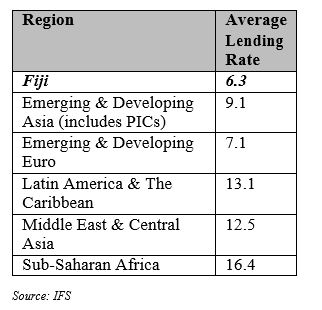 It is also important to consider that there are other key factors such as the depth of the financial system and central banks’ unconventional policies that influence the movements of interest rates in Fiji and the selected countries over the years.

Given the current depressed economic environment and elevated risk level, commercial banks will understandably, at this stage, price their risks higher given the uncertainty. However, going forward, the RBF expects that the high levels of liquidity in the banking system will continue to place downward pressure on interest rates down the line when the economy recovers.