The purpose of this report is to provide an update on the complaints that the Reserve Bank received at Quarter 4, 2013.

Majority of complaints received were for banking fees and charges, lending and mortgage related complaints, terms and conditions of insurance policy and declinature of insurance claims due to non-disclosure of material information.

Currently, the Reserve Bank and the Fiji Commerce Commission is working on a Memorandum of Understanding.

During the quarter, spot checks were conducted on all LFIs in Suva on the display of their complaints posters in their branches. Majority of the LFIs complied with the requirement.

Types and number of complaints received in Quarter 4 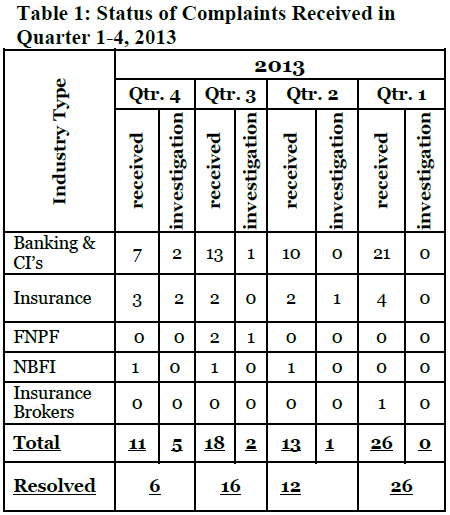 The number of complaints received in Quarter 4 by the Reserve Bank decreased by 39 percent when compared to Quarter 3. Majority of the complaints were banking related (bank fees and charges, lending and mortgages). 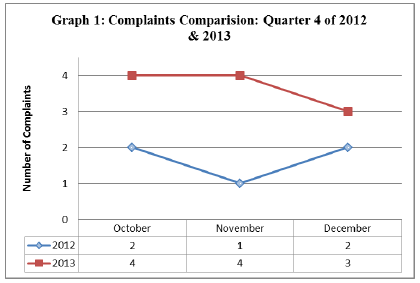 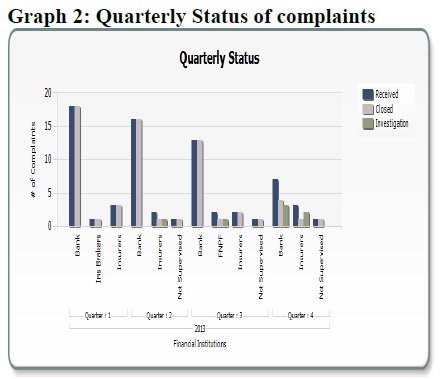 For Quarter 4 of 2013, the numbers of complaints that are under investigation or pending to be closed were 5 complaints. All of the pending complaints are with the LFIs.

Similarly, for Quarter 3 of 2013, 2 complaints are with the LFIs. These complaints were on unlawful withdrawals and Members Funds with the FNPF.

For the second quarter of 2013, there was only 1 complaint pending investigation. This was in regards to the Terms and Conditions of a Group insurance policy.

The nature of complaints received by the Reserve Bank on the banking industry was mainly on lending, mortgagee sales, interest rates, fees/charges and Fraud and Forgery (Table 2). 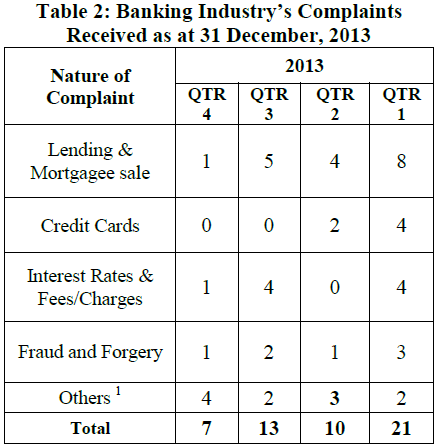 The complaints received by the RBF against the insurance industry were mainly on refutation of insurance claims by the insurers due to non-disclosure of material information. (Table 3) 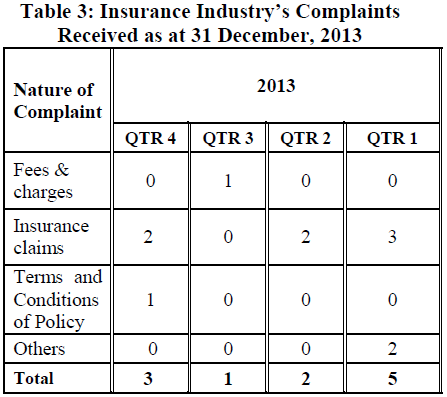 In the quarter, Reserve Bank held 21 meetings with financial institutions. These meetings were on issues raised by complainants and on ways to resolve them.

In line with the resolution of July 2013 Complaints Management Forum Meeting regarding Complaints Management Posters, 16 spot checks were conducted in Suva (this includes Banks and Credit Institutions, Insurance Companies and FNPF) to ensure compliance with the policy guideline on Complainants Management. Most of the LFI’s displayed the posters at strategies location which are frequented by the public.

The third Complaints Management Forum was held on 29 November 2013.