The Reserve Bank of Fiji (RBF) is proud to announce that a circulation banknote and coin commemorating Fiji Rugby 7s Gold Medal win at the Rio 2016 Olympics were officially unveiled by Hon. Prime Minister and Minister for i-Taukei Affairs, Sugar Industry and Foreign Affairs, Rear Admiral (Retired) Josaia Voreqe Bainimarama this evening at the Grand Pacific Hotel. Fiji’s circulation currency will now include an iconic $7 banknote and a special 50 cent coin.

Governor, Barry Whiteside, said that today was a memorable occasion for all Fijians as an iconic and unique $7 banknote, the only such circulating banknote in the world, was unveiled along with a 50 cent commemorative circulation coin to honour our 7s Rugby gold medal Olympians. Governor Whiteside said that 7s rugby is a sport that is loved by all Fijians, a sport that we excel in and a sport that continues to unite us all.

For the first time ever, Fiji will have a banknote with one side that is horizontally oriented but the other side being vertically oriented. These orientations have been very carefully thought out to complement the designs that have been selected. The coin is also unique in its own way. Both the front and back have designs that are also truly remarkable and complement each other in much the same way as the banknote.

Governor Whiteside said that soon after the Gold medal win in Rio last year, the RBF had announced that a coloured (painted) commemorative circulation coin would be released in limited quantities commemorating this first ever achievement for us. However, due to a number of technological limitations we had to reconsider our options in regard to the painted coin. The Governor said that eventually a non-painted coin was decided as the way forward bearing in mind that even our children could easily get hold these as a reminder of our victory in Rio.

Oberthur Fiduciaire, a prominent banknote printer in France, and the Royal Canadian Mint (RCM) were awarded the contracts for the designing and printing of the banknotes and coins respectively. The entire design, production and deliveries took 8 months compared to what usually took 12-18 months. Governor Whiteside extended the RBF’s sincere appreciation to Oberthur Fiduciare and RCM for their technical support and guidance received and for meeting these tight deadlines.

The designs as well as the unique denomination of $7 were chosen by the Bank’s in-house Currency Technical Committee (CTC) with final approval obtained from the RBF Board of Directors. The CTC worked closely with the suppliers in ensuring the selected designs were accurately transformed appropriately for banknote and coin representations. Governor Whiteside also extended RBF’s sincere appreciation to owners of various images that have been used in the process as well as those who assisted towards the completion of this memorable project.

The $7 and 50 cent commemorative banknote and coin will be issued into circulation from Friday, 21 April 2017 commencing from Suva and gradually to other areas. It will take some time before these notes and coins will be widely available across Fiji given the distribution logistics. Governor Whiteside said that the $7 and the 50 cent coins will carry legal tender status just like any other banknote and coin, and could be used for paying for goods and services. However, these are expected to fast become collectors’ items. Only two million banknotes and one million coins have been produced.

Features of the $7 Commemorative Circulation Banknote 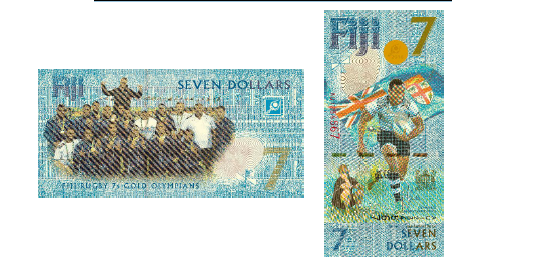 The primary colour of the $7 commemorative banknote is blue, synonymous with the Fiji Flag. The front of the note is vertically oriented to complement the front designs.

Fiji Rugby 7s Olympic Captain Mr Osea Kolinisau OF is featured as the main image with the Fiji flag in the background, a reminder not only of our national identity but also that Mr Kolinisau was Team Fiji’s flag bearer at the Rio 2016 Olympics. Fiji Rugby 7s Olympic Coach Mr Ben Ryan CF sitting on the Sigatoka Sand Dunes in pensive thought mode is featured as a sub-image. The Fijian Coat of Arms is also depicted together with the signature of the Governor of the Reserve Bank of Fiji.

A special Optically Variable Ink (OVI) is also used on the front of the note in the form of a round golden patch, depicting the gold medal but with the RBF logo, the tagaga, inserted together with the year 2016. There is also a see-through feature in the form in designs that complement the backdrop as well as designs from the reverse of the note. A watermark feature is also present depicting Fiji Rugby 7s Olympian Mr Savenaca Rawaca OF, a leading ball carrier, in motion with a rugby ball. The watermark is oval-shaped with white rings around it depicting a rugby ball in motion.

The serial numbers of the banknote are vertically and horizontally oriented in red and blue fonts respectively with the prefix AU, the chemical symbol for Gold. A STARsheen® 2mm security thread has also been incorporated with the words ‘FIJI 7s GOLD OLYMPIANS’.  When viewed at an angle, the numeral ‘7’ and a rugby goal post with a rugby ball can be seen. These designs, together with a gold medal around Captain’s neck, fluoresce to green when viewed under an ultra violet light. The reverse of the banknote features the Fiji Rugby 7s Gold Olympians with the Prime Minister of Fiji, Hon. Josaia Voreqe Bainimarama and team officials. The Prime Minister is also recognised as the President of the Fiji Rugby Union. The word ‘Fiji” appears on the top left hand corner of the note while the denomination in words appears on the top right hand corner with the RBF logo. The denomination numeral is present on the bottom right hand corner of the note in gold font. The watermark and the see-through feature are also visible on the back of the note with Fijian masi designs across the note complementing the design elements.

When placed under an ultra violet light, the gold medals around the players necks and the RBF logo fluoresces to green.

The front of the 50 cents coin features the word ‘FIJI’ and the issuing year ‘2017’ with the denomination ‘50 cents’ and a representation of the Fijian Coat of Arms. The main image is that of Fiji Rugby 7s Olympic Coach, Mr Ben Ryan CF, sitting on the Sigatoka Sand Dunes with arms folded with the ocean as the backdrop and the words ‘BEN RYAN SEVENS HEAD COACH’ inscribed around the coin in a semi-circle.

The reverse of the coin features the words ‘FIJI RUGBY 7s’. The main image is that of Fiji rugby 7s team in their pre-game iconic bonding mode with the words ‘GOLD OLYMPIANS’ inscribed on the bottom of the coin.

The coin is round shaped with milled edges with do-decagon inside edges.