Complaints Management Update As at 31 May 2010

1. The Financial Systems Development and Compliance Group (FSDC) continues to receive complaints from customers of financial institutions in relation to the products and services it provides and other operational matters. As at 31 May 2010, 21 complaints were received, excluding 6 that were copied for information only.

2.An update on the 21 complaints that were handled by FSDC is provided in the following section.

B. Update on Complaints Management

a. As at 31 May 2010, 2 out of the 21 complaints handled were closed. The financial institutions and complainants were requested to provide clarification and/or additional information in relation to 13 and 3 complaints respectively, while FSDC was assessing 2 complaints and 1 was with the Court. The breakdown by industry type and its resolution status is summarized in Table 1 below:

b. There were no customer complaints received against the Credit Institutions, Insurance Brokers and Agents, Foreign Exchange Dealers and Money Changers as at 31 May 2010.

a. As at 31 May 2010, a wide diversity of complaints was received, some were reasonably complicated and legal in nature, while others were comparatively straightforward. Complaints against Banks were largely related to fraud and forgery and customer service, while those against Insurers pertained to disagreements on insurance claims, mainly under the medical insurance class.

b. For Non-Bank Financial Institutions, customers were mostly dissatisfied with loans and mortgage facilities, particularly the interest rate charged. For participants in the Capital Market, the complaints varied between concerns related to share pricing, brokerage fees and investment advice rendered.

c. The breakdown of complaints by nature is summarized in Table 2 below: 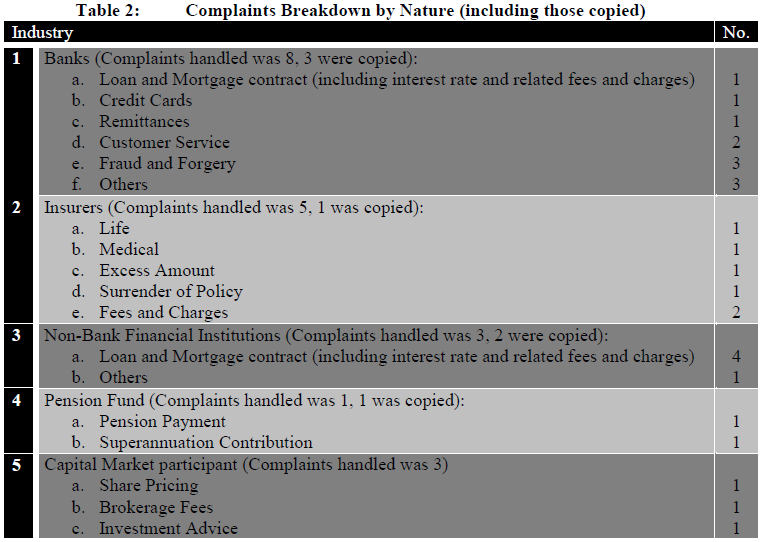 6. At the RBF Board meeting in April 2010, the Complaints Management Policies for Licensed Insurers and the Fiji National Provident Fund was approved for implementation, wef 03 May 2010. As part of public awareness, the FSDC Group has finalized the RBF Complaints Brochure for Governors approval. The RBF Customer Complaints Form will be uploaded on the RBF website shortly.